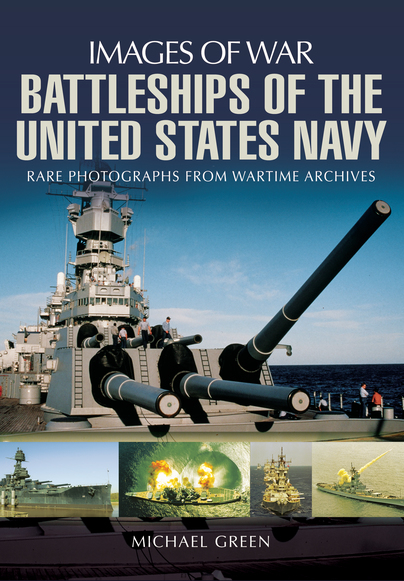 Add to Basket
Add to Wishlist
You'll be £14.99 closer to your next £10.00 credit when you purchase Battleships of the United States Navy. What's this?
+£4.50 UK Delivery or free UK delivery if order is over £35
(click here for international delivery rates)

From 1895 to 1944 the US Navy commissioned some 60 steel-clad battleships; the first being Indiana (BB-1) and the last USS Missouri (BB-63). After an impressive showing in the Spanish-American War and the 'Great White Fleet's' circumnavigation of the world, US battleships played only a minor role in the First World War. They came into their own in WW2 primarily bombarding enemy held coastal regions and supporting Allied operations in Europe and the Pacific. Their firepower was awesome and the later examples had nine 16-inch and up to twenty 5-inch guns plus copious anti-aircraft defences.

On the few occasions these mighty ships took on Japanese counterparts, they performed brilliantly but protection of the increasingly important aircraft couriers was more decisive. Armour plate nearly a foot and a half thick saved many from fatal attack from suicidal kamikaze pilots.

Post WW2 the battleships were relegated to war reserve status but later their value projecting American military power worldwide and their conversion to platforms for cruise missile saw their re-birth. The last US battleship retired in 1992 having served in the Korean and Vietnam War, the Middle East and finally Desert Storm.

This fine book gives the expert and layman a privileged overview of one of the greatest weapon systems in military history.

Maritime fans will appreciate the range of subjects covered, and this is a treasure trove of information for modellers.

This volume is a visual treasure-trove for
enthusiasts of the battleships of the US Navy.

I hear reservations about the Images of War range of books. I think it’s fair to say I am a bit of fan as far as things go. Some books are better than others and you see one occasionally that is an absolute winner from first to last. This book by Michael Green is one of them as far as I am concerned...

... Michael Green has produced a really fine book. The archive photos are exceptional and the text explaining the beginnings of the US Navy battleship era and the multitude of classes that followed in service from the turn of the 20th Century until recent times flows really well and gives us a great deal to go on...

... From my photo archivist’s perspective the images are really superb and with good quality captions they all make sense. The book hasn’t just been thrown together and forms into a narrative that really gets things right. I am very impressed with this book. It has helped me learn a lot more about the US Navy and I have taken this a little further with time spent reading internet articles and so on and I am always pleased when books leave me with more questions than answers. Great stuff.

This book is full of some very good photographs and extensive narrative to accompany them, covering the history of successive battleship classes.

This is another title in the fine range of Images of War series. The series stands on the careful selection of rare archive images, but each title is more than a photo essay. There is crisp text to support the image selection in telling the story. In this issue, there are some excellent colour images with the mainly monochrome selection. Enthusiasts and model makers are very well served by the image selection, but this is a very affordable book that is very useful to the younger reader, or anyone wishing to develop knowledge in this area of warfare and technology.