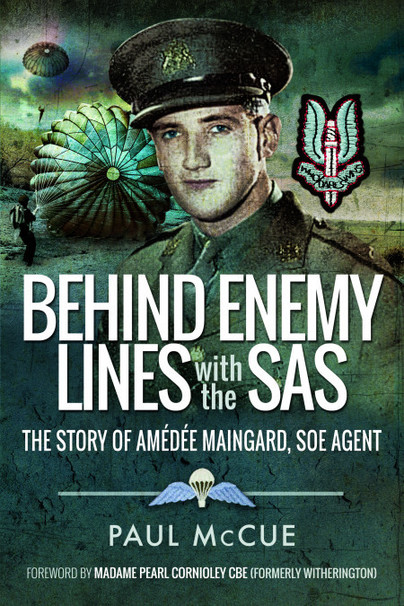 Behind Enemy Lines With the SAS (Paperback)

Add to Basket
Add to Wishlist
You'll be £12.99 closer to your next £10.00 credit when you purchase Behind Enemy Lines With the SAS. What's this?
+£4.50 UK Delivery or free UK delivery if order is over £35
(click here for international delivery rates)

Amde Maingard was a young Mauritian studying in London in 1939 who volunteered for the British Army. After a frustrating spell in the infantry, Maingard joined the Special Operations Executive (SOE), He parachuted into occupied France in 1943 to join the Stationer circuit, initially as radio operator but soon was second-in-command in the circuit, arranging the delivery of weapons, supplies and personnel to the Resistance.

After a years clandestine work, he narrowly escaped the fate of his organiser who was, captured by the Germans in May 1944. Undeterred, Maingard developed his own Shipwright circuit in time to support the Forces Franaises de lIntrieure (FFI) and the arrival of fifty-five men of 1st SAS Regiment for the ill-fated Operation BULBASKET shortly after D-Day. Somehow managing to keep the peace among the Gaullists, communists, British and Americans fighting for the French common cause, Maingard continued his vital work until the liberation of central France, earning recognition from both the British and French governments. He went onto play a leading role in Mauritius.

Behind Enemy Lines With the SAS is more than a story of great bravery and dedication to duty in wartime. Maingard returned to Mauritius and was instrumental in developing the islands tourism and hotel industry. Founder and first Chairman of Air Mauritius, he became one of his countrys most successful post-war businessmen before illness cut short his ambition and he died in 1981 at the age of 62.

Readers will be grateful to Amde Maingards biographer for making this remarkable mans achievements in peace and war better known.

"This is a tremendous book, well researched, well written and stacked with detail that can only come from a significant research effort."