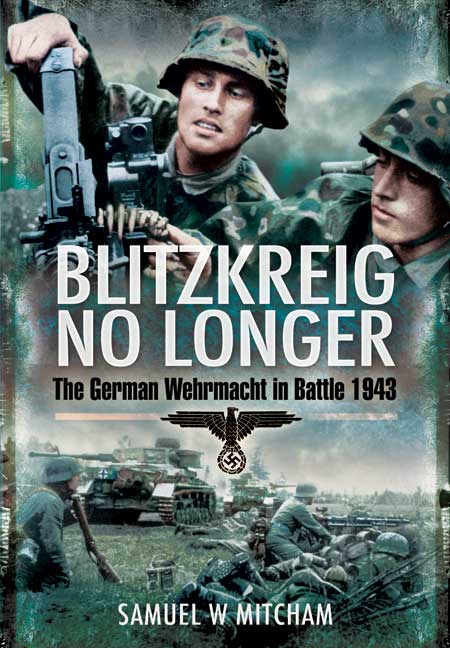 The German Wehrmacht in Battle, 1943

Add to Basket
Add to Wishlist
You'll be £25.00 closer to your next £10.00 credit when you purchase Blitzkrieg No Longer. What's this?
+£4.50 UK Delivery or free UK delivery if order is over £35
(click here for international delivery rates)

In 1939, the Germans stormed into Poland, shocking the world with the speed, the destructiveness, the seeming invincibility of their blitzkrieg. By 1943, the tide had started to turn. Successes still came, but these were increasingly eclipsed by defeats and retreats, setbacks and surrenders. In Blitzkrieg No Longer, Samuel W. Mitcham, Jr., offers a riveting glimpse inside the Third Reich's war machine during the pivotal year of 1943.

The year began well enough for Hitler and his armed forces, with the brilliant Erich von Manstein orchestrating an almost miraculous regrouping after the disaster at Stalingrad. The Wehrmacht lived to fight another day--indeed, another two years--but growing Allied strength and experience combined with German shortages in men and materiel to stymie Germany's advances on all fronts.

In the Mediterranean, Erwin Rommel's earlier gains in North Africa were erased by the surrender of Tunisia in May. Two months later, the Allies landed in Sicily, initiating a five-week battle that ousted the Germans from the island, although some 60,000 men escaped to Italy, which the Allies invaded in September. German troops there were entrenched and fought tenaciously in a campaign that would last until 1945.

On the Eastern Front, the barbarous warfare of 1941 and 1942 continued unabated--only now the Soviets often had the upper hand, both in numbers and, more and more, in operational ingenuity. Even Manstein could not produce a victory at Kursk, where Soviet T-34s beat German Tigers and Panthers in the largest armour battle in history. Kursk would mark the beginning of Nazi Germany's long and bloody retreat in the East.

The Third Reich's defeats were not limited to the ground. At sea, the Allies neutralized the U-boat threat, and in the air, they dominated the ‘Luftwaffe’ and took the war to the German home front.

The war would drag on for two more brutal years, but the end was now in sight. No longer could the Germans mount their feared blitzkrieg; no longer could they win the war. Mitcham chronicles this turning-point year with insight and drama.


One of the obsessions of historians of the Second World War has been the hunt for the 'turning point' - the year in which an Allied victory became inevitable. The two usual candidates are 1942, ending with the disaster at Stalingrad, or 1943, the subject of Mitcham's work. This was the year that saw the defeat of the last major German offensive on the Eastern Front, at Kursk, as well as defeats in Tunisia, on Sicily and in the Atlantic, which control of the air was slowly being seized by the Allies, even in the skies above Germany. The position was even worse in the Mediterranean, where a major German army was lost in Tunisia, Sicily captured, the south of Italy invaded, and Mussolini and the Italian fascists toppled from power.

Mitcham starts with a look at the development of the German armed forces (the Wehrmacht) from 1933 to the start of the war and then through the initial victorious campaigns in Poland, Scandinavia, the West, the Balkans and the Soviet Union in 1941, as well as the setbacks of 1941 and 1942, ending at Stalingrad. The main text begins with a look at Manstein's impressive performance on the southern flank of the Eastern Front, where he was able to restore the line broken to the west of Stalingrad, before moving on to look at each major campaign fought by the German armed forces during the year, from the defence against the strategic bombing campaign to the defeat of the navy as well as the major land campaigns that saw Germany fighting on two fronts well before the launch of the 'Second Front'.

Samuel W. Mitcham, Jr., is a former U.S. Army helicopter pilot and holds a doctorate from the University of Tennessee. An internationally recognized authority on the ‘Wehrmacht’ and Nazi Germany, he has written numerous books, including, German Order of Battle, Panzers in Winter, Rommel's Desert War, Retreat to the Reich, and The German Defeat in the East.