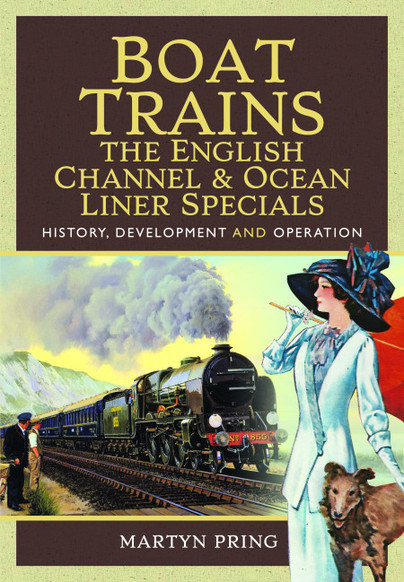 You'll be £35.00 closer to your next £10.00 credit when you purchase Boat Trains – The English Channel and Ocean Liner Specials. What's this?
+£4.50 UK Delivery or free UK delivery if order is over £35
(click here for international delivery rates)

In many ways this title featuring the evolution of cross-channel boat trains and the many dedicated services responsible for moving international passengers to and from trans-Atlantic steamers, is an extension of luxury railway travel. But that’s not the full story as it encapsulates more than 125 years of independent and organised tourism development. At the end of the nineteenth century, faster and more stable twin-screw vessels replaced cross-channel paddlers resulting in a significant expansion in the numbers of day excursionists and short-stay visitors heading to Belgium, France and the Channel Islands. Continental Europe, as it had done since the end of the Napoleonic Wars beckoned, introducing ideas of modern-day mass tourism.

Numerous liners bestriding the globe were British domiciled. Major ports became hives of commercial activity involving moving freight and mail, as well as transporting all manner of travellers. Not only was there intense competition for passenger traffic between the Old and New World and Britain’s imperial interests, greater numbers of well-heeled tourists headed off to warmer winter climes, and also experimented with the novel idea of using ocean steamers as hotels to visit an array of diverse destinations. Cruise tourism and the itinerary had arrived as ‘Ocean Special’ boat trains became essential components of railway and port procedures.

Whilst some railway operations were dedicated to emigrant traffic, continental and ocean liner boat trains were also synonymous with the most glamorous travel services ever choreographed by shipping lines and railway companies working closely in tandem. This well illustrated book explores the many functions of boat train travel.

This is a well researched and referenced book. It's one of the best presented I've seen, with well chosen historic illustrations.

This is an outstanding book backed up with some excellent photographs. I would very highly recommend it to our readers.

This book is well illustrated throughout using archive photographs and period poster reproductions.

The book is thoroughly researched, commendably well indexed and referenced, and illustrated with a wealth of photos and posters to provide a fascinating picture of a world of travel that has all but passed into history.

I enjoyed the book and have no hesitation in recommending it.

Welcome to the first STEAM blog of 2021! We are kicking off this year’s Object of the Month series with a special guest blog from marketing and tourism researcher, Martyn Pring - click here to read

Another interesting volume with a tremendous amount of research having been undertaken by Martyn Pring as evidenced from the Bibliography and Newspapers/periodicals noted.

Like its companion volume, Boat Trains is crammed with fascinating detail as well as a most impressive array of full-colour illustrations reproducing posters and historic photographs of trains, docks and stations. These will most certainly appeal to enthusiasts and to some general readers.

Martyn Pring has a background in marketing, tourism and academia. He is currently an author and independent researcher with interests in culinary tourism, destination marketing, luxury branded sectors, travel histories as well as travel writing, A self-confessed railway, maritime and aviation enthusiast from a young age, he wrote the successful story of Luxury Railway Travel: A Social and Business History. Martyn lives and works in Dorset.