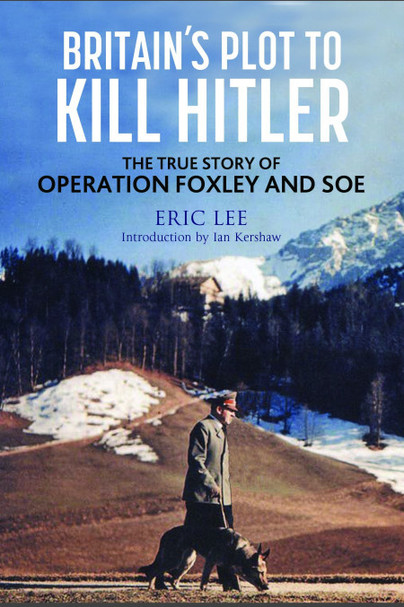 The True Story of Operation Foxley and SOE

Add to Basket
Add to Wishlist
You'll be £20.00 closer to your next £10.00 credit when you purchase Britain's Plot to Kill Hitler. What's this?
+£4.50 UK Delivery or free UK delivery if order is over £40
(click here for international delivery rates)

Operation Foxley was the name of the secret plan supported by Winston Churchill to assassinate Hitler in 1944-45. More than 75 years after its conception, the assassination plan remains shrouded in mystery. Eric Lee’s new book is the product of painstaking research and sheds more light on this plan. Lee also asks what would have happened if Foxley had been executed successfully.

Concocted in 1944 by the British Special Operations Executive (SOE), Foxley’s objective was to kill Hitler and any high-ranking Nazis or members of the Fuhrer’s entourage who might have been present at the time.

Different methods of assassination had been considered by the SOE, but were ultimately deemed too complicated. These methods included derailment and destruction of the Hitler’s personal train, the Fuhrerzug, by explosives, and also clandestine means such as slipping a tasteless poison into Hitler’s drinking and cooking water. Some of the ideas were considered quite bizarre, including one scheme to hypnotise Rudolf Hess and return him to Germany to kill Nazi leaders. The Americans and Soviets had their own plans to kill Hitler too, with some equally strange ideas (including injecting female hormones into the Fuhrer's vegetables).

Eventually, after intel gathered revealed that Hitler took a routine, solitary walk every morning to the Teehaus on the Mooslahnerkopf Hill from the Berghof residence, a plan was created to assassinate Hitler using a sniper rifle fitted with a silencer.

A perfect investigation for readers who enjoy reading about modern history, and the Second World War in particular. It is also tailored to those with an interest in the “secret war”, covering topics like the SOE, and military intelligence.


This is a fantastic and well researched book, well balanced in its research , full of detail and with many links for further reading , I found the complex web of deception frightening in its extreme, in fact were I a particularly unpopular Russian Leader, then a copy of this would be on my reading list

200 pages including hundreds of pictures and maps, technical drawings , and every little background detail about Adolf Hitler. An amazing and informative and well researched read, and a guide to modern day spooks to double check every little detail.

This is quite an intense feeling book from the start as the reader learns about various plots and plans not just from the British side and SOE, we also learnt that there were schemes to assassinate Hitler by the Americans & Soviets too. I understand there had to be lots of secrecy and deviance, but I did think as it seemed many were looking to assassinate Hitler, could there not have been some plotting between interested sides. I enjoyed the way this book was presented as the first half is written by the author but the second half contains photocopies of the various sources of information and files/documentation which kind of made it feel even more realistic as you were reading through the info that was being passed around at the time. Although I must admit there were only a couple I found weren’t that easy to read.

I really enjoyed this book as it felt as if it was half story and half fact. I quite enjoy the author’s writing and really enjoyed his previous book Night of the Bayonets, his writing feels very well explained but to the point. I’ve taken notes of some of the excellent books from the bibliography, and I’ll be reading these in the near future hopefully. Overall, I would happily recommend this book for anyone into their World War II history.

The gripping story of various plots and ideas to rid the world of Adolf Hitler by the SOE.

This is a really interesting read for anyone interested in clandestine operations and the workings of the SOE during the War. It also provides an interesting peek into the out of box thinking the secret services were considering. The book also touches on briefly some of the ideas of the Americans dn Russians who were also thinking about removing Hitler from power.