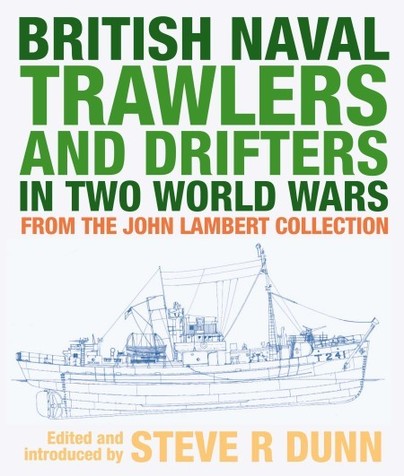 Add to Basket
Add to Wishlist
You'll be £28.00 closer to your next £10.00 credit when you purchase British Naval Trawlers and Drifters in Two World Wars. What's this?
+£4.50 UK Delivery or free UK delivery if order is over £35
(click here for international delivery rates)

"These wonderfully detailed drawings, which are backed by a selection of photographs and a detailed complementary text, offers a superb technical archive for enthusiasts and ship modellers, but the book also tells a fascinating story of the extraordinary contribution the vessels and their crews made to the defeat of Germany in Two World Wars."

"Steve Dunn has edited and produced an excellent volume which is a valuable resource of maritime and naval history. It is also a superb tribute to Great Britain’s fishing fleet and its crews."

"For those who relish detailed technical drawings and scrupulous accuracy the 50-odd pages of carefully reproduced plans of different classes of fishing vessels and the guns with which they were equipped, will be a treat."

Steve Dunn an author of ten works on naval history and member of the Society for Nautical Research and the Britannia Research Association was an excellent choice by the publishers to provide a clear and engaging text. The high-quality photographs, excellent line drawings and plans of the ships and weaponry along with informative appendices and a fulsome index make this work a fitting commemorative to these vessels and the crews that manned them as well as a great addition to the library of anyone with an interest in naval technology and history.

Finally, there are numerous short appendices, a full list of references and bibliography. The great feature of the book of course is the exquisitely detailed double-page spread line drawings of trawlers, drifters, equipment and armaments which comprise 58 pages towards the latter end of the book and were John Lambert's life work. Given this focus it would be very easy for the book to be satisfied with being a fairly dry illustrated catalogue, but Steve Dunn avoids this by providing an excellent, readable survey of the subject alongside the plan detail, the one complementing the other... Highly recommended. 4 stars.

Anyone familiar with John Lambert’s drawings will not be disappointed by those assembled here; quality and quantity almost sufficient to build a boat and certainly great for any ship modeller.
The quality of the publication is such that if the content had been limited to the many photographs and drawings with simple annotations it would have been a very interesting book but with Steve Dunn’s supporting narrative it is raised to a higher level.
We highly recommend it.

Trawlers and drifters….not of interest …don’t you believe it! Read this book and be fascinated by the massive contribution they and their crews-predominantly fisherman- made to keeping the sea lanes to the country open as well as sterling service abroad.

This book is in two parts, the firstly the history of these ships, then the wonderful drawings, 30 sheets of them by John Lambert.

The story begins with the realisation that special ships would be needed to defend against the newly developed mines and submarines of the early 20th century. It tells how a small group of far sighted officers pushed through the adoption of the fishing fleets into these roles and how they set up the organisation of them for the Great War, at fairly short notice. The chapters dealing with the work of these ships offer deep insight into the workload and working conditions of the crews, and importantly their bravery. The numbers serving, and the sadly losses make a big impact on the reader. The process is repeated for the next war, and the reader is again left in a sense of awe for these men and their ships.

The book is lavishly illustrated with over 90 beautiful and carefully chosen photographs. The quality of reproduction is superb, with the book being printed on gloss paper and large pages. The detail is astounding.

Whether a modeller, or simply a naval enthusiast, this book will be an excellent addition to your library.

If like me you know little or nothing of the work of these small ships in both World Wars, I heartily recommend reading this one. There are also a lot of archive photos which illustrate the first two parts of the book. The plans are a marvellous resource for those interested in small ships and especially for modellers who will enjoy this as a detailed reference to work with. I think Seaforth have done a great job in sharing the John Lambert collection with these books, and author Steve R Dunn has done well in giving us a context to broaden our understanding of them all.

As my family were driftermen, this book was a must-read.
The photos and war history was a very good read indeed.
Recommend it.
Ron Taylor (FEPOW Family)