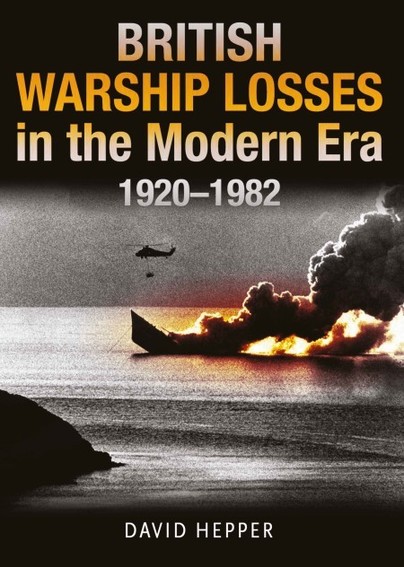 Add to Basket
Add to Wishlist
You'll be £24.00 closer to your next £10.00 credit when you purchase British Warship Losses in the Modern Era. What's this?
+£4.50 UK Delivery or free UK delivery if order is over £35
(click here for international delivery rates)

This important new reference work details all those ships and vessels of the Royal Navy, large and small, which were lost by accident or enemy action, during the twentieth century, from the end of the First World War, to the last years of the century. In all, the fates of over 2,000 ships and small craft are covered, from aircraft carriers and battleships to motor launches, harbour tenders and tugs. Those vessels hired or purchased for wartime service, such as trawlers, paddle steamers and yachts are also listed.

During wartime ships are lost; it is their purpose to go in harm’s way. Hostile gunfire, torpedoes and mines were established threats throughout the period, while the increasing threat of air attack and the introduction of weapons employing new technology, such as influence-triggered mines, homing torpedoes or air-launched guided weapons added to the risks of operating in a hostile environment. Ships operating in extremely hazardous conditions, such as at Dunkirk in 1940 or Singapore in 1942, suffered heavy losses in brief, concentrated conflicts; but the long continuous campaigns, such as the Atlantic convoys or the constant need to sweep for mines also took their toll. Peacetime losses are dominated by submarine casualties, demonstrating the dangerous character of that service. To this may be added the hazardous nature of the sea itself, when ships are lost in heavy weather; sometimes, human error or plain foolishness may play a part.

The core of the book is taken up by those losses experienced during the Second World War, but peacetime losses and more recent conflicts such as the Falklands War of 1982 are included. Arranged chronologically, every entry notes the outline details of the vessel, identifies the Commanding Officer, where known, and gives a full and often harrowing account of the circumstances of the loss and the number of casualties. The details come from extensive original research using primary source material wherever possible, particularly the relevant War Diaries and the collected loss and damage reports, casualty reports and reports of proceedings, now in the National Archives. Wartime losses of the Dominions are included, to ensure completeness.

This comprehensive record of warship losses, from all causes, suffered by the Royal Navy over the past one hundred years, is the first single-volume work on the subject and represents a major milestone in naval research and publishing.

The descriptive text for each loss and the brief summaries of the actions in which they were taking part make this book into a significant improvement over earlier works on the subject and it must be considered the definitive reference on Commonwealth warships during the era in question.
It is an outstanding book which I have already added to my library. I recommend it highly.

"This volume is an amazing encyclopaedic, catalogue of British warships lost between 1920 and 1982, by far the greatest number being all those lost in the Second World War. The huge catalogue of losses makes for rather sombre and chastened reading. With a few brief introductions at the beginning of each section the losses are covered in straight chronological order. It is absolutely staggering to see the vast scale of the many hundreds of individual ship disasters, and to try and imagine the tragedy of so many lives lost in the process, not to mention the enormous cost to the nation of all those lost ships...The volume is well illustrated, with a carefully chosen collection of forty black and white photographs. It is strongly recommended to historians, authors, researchers and all those with an interest in the history of the Royal Navy and the Second World War."

DAVID HEPPER has had a lifelong interest in maritime history and served for twenty-five years in the Royal Navy, specialising in electronic warfare, before moving to the Civil Service. Several years research into ships histories, using original documents in the National Archives, has led to published works on naval losses during the First World War and the era of sail. He has also assisted and advised other authors with research into the careers and fates of individual ships. He is now retired and lives near Woodbridge, Suffolk.