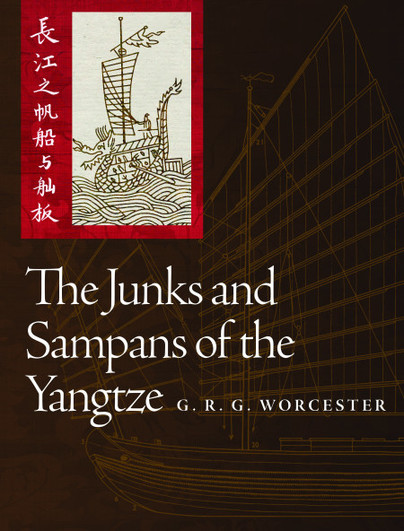 The Junks and Sampans of the Yangtze (Hardback)

Add to Basket
Add to Wishlist
You'll be £40.00 closer to your next £10.00 credit when you purchase The Junks and Sampans of the Yangtze. What's this?
+£4.50 UK Delivery or free UK delivery if order is over £35
(click here for international delivery rates)

The Portuguese missionary Gabriel Magaillans noted some 300 years ago that ‘. . . there are more vessels in China than in all the rest of the known world.’ In a country so dependent on water transportation for thousands of years, this was almost certainly true. In the twentieth century the rivers and harbours of China still teemed with junks and sampans, and almost as amazing as their numbers was the huge variety of types, evolved over the centuries to meet the needs of all kinds of waterborne commerce.

In this fascinating and brilliant account, the author, who for thirty years was a River Inspector for the Marine Department of the Chinese Maritime Customs service, described in detail the lives of the junkmen and the craft they sailed, a task made easier after he was released from his official duties in order that he might spend all his time on Chinese nautical research. This enabled him to travel in places not usually accessible to foreigners in China, and to sketch and write about the boats, the people, and their customs. His eight years of field research were carried out during one of the most disturbed periods of China's eventful history – amidst almost continual fighting, bandit raids, enemy occupation, floods and droughts – culminating, for himself and his wife, in a three-year internment in a Japanese prison camp. Five definitive works on the seagoing and riverine junks of China were the result of the author's research, travel, curiosity, and enthusiasm.

Within the pages of this wonderful book, which has now acquired classic status, the reader is offered the chance to let an old China hand take him to one of the great rivers of the world for a last look at a timeless land just before modernity swept away a whole maritime culture. Stunningly illustrated with more than 900 drawings and photographs, this new edition will captivate historian, traveller, modelmaker and sailor alike.

‘This unique book is a comprehensive and authoritative record of the vessels which for centuries provided practically the sole means of communication and transportation in the vast area drained by one of the world’s greatest waterways,’ L K Little, former Inspector General of the Chinese Customs Service

‘There is really nothing to compare it with, and it is unlikely that it will be superseded in the foreseeable future.’ The New York Times


Within the pages of this superb book, the reader is given the chance to allow an “old China hand” take them on a journey into maritime world in a timeless land just before modernity swept away this ancient culture. This new edition of a classic tome will captivate historian, traveller, modelmaker and sailor alike.

The complexity of Chinese maritime life and the author’s attention to detail are both stunning. However, overwhelming detail is also where the book really shines, especially technical detail.

The Nautilus Telegraph, 'Book of the Month', April 2021 Issue.

This is an utterly compelling account of a way of life on the Yangtze that was fast disappearing as Worcester was researching it, capturing the last glimpses of a world that has almost totally disappeared (in some cases physically so, below the waters of new reservoirs!). A highly recommended book, that does also include enough technical detail to satisfy the boat enthusiast!

The author originally joined the Navy during the days of sail. Leaving the Navy in 1919 he joined the Marine Department of the Chinese Maritime customs Service and during his 30 years as river inspector he assisted in opening the Yangtze River to steam navigation up to 1450 miles from the sea. It was here he developed a deep interest and affection for the junkmen and their craft. This is a large volume containing all sorts of information, detailing the lives of the junkmen along with ancient histories and of course their craft. Clearly a seriously researched book over his 30 years this publication is unique and unusual to say the least. Recommended to anyone.

George Raleigh Gray Worcester (1890-1969) termed himself a sailor by profession. Born in England in 1890, he entered the Royal Navy in the days of sail and rounded the Horn as a midshipman. Although he turned his back on the sea in 1919, the balance of his professional life was spent within sight and sound of water. He joined the Marine Department of the Chinese Maritime Customs Service, and during his career as a River Inspector assisted in surveying, marking, and opening the Yangtze to steam navigation to a point 1,450 miles from the sea. In his wanderings up and down the coast and rivers of China, he developed a deep interest in, and affection for, the junkmen and their craft and set about recording both in remarkable detail. Later, after his retirement, he supervised the construction of the unique Maze Collection of Chinese junk models, once housed in the Science Museum in London; many were built by his own hands.