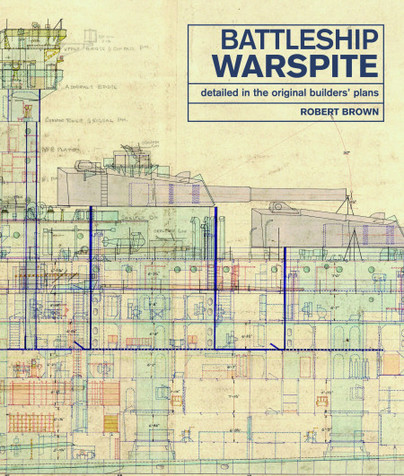 detailed in the original builders' plans

Add to Basket
Add to Wishlist
You'll be £22.50 closer to your next £10.00 credit when you purchase Battleship Warspite. What's this?
+£4.50 UK Delivery or free UK delivery if order is over £35
(click here for international delivery rates)

Today these plans form part of the incomparable collection of the National Maritime Museum at Greenwich, which is using the latest scanning technology to make digital copies of the highest quality. This book is the first of a series based entirely on these draughts which will depict famous warships in an unprecedented degree of detail – complete sets in full colour, with many close-ups and enlargements that make every aspect clear and comprehensible. Extensive captions point the reader to important features to be found in the plans, and an introduction covers the background to the design.

The celebrated battleship Warspite is an ideal introduction to this new series – an apparently familiar subject, but given this treatment the result is an anatomy that will fascinate every warship enthusiast and ship modeller.

reviewed by Ian Sturton for

This is a splendid book, giving us a fantastic level of detail for one of the most powerful British warships of the Second World War.

That this series will have appeal to model makers is inevitable, as will its appeal to those more interested in the technical aspects of warship design than the operational histories. The quality of reproduction - which is excellent - will help enormously with its appeal.

This is the first of a new series of volumes which features a famous warship and draws upon original plans held by the National Maritime Museum in Greenwich. The Museum contains a collection of general arrangement drawings of British warships and these detailed drawings record the technical appearance of these ships as they entered service. This first volume features the battleship WARSPITE and the drawings utilised document the ship from her construction and reconstruction in the mid-1930s. The latest scanning technology has been used to reproduce the drawings used in this superbly produced book which contains a complete set of “as fitted” general arrangement plans. There are enlarged sections and close-ups together with extensive and descriptive commentaries inserted alongside relevant sections of each plan. The plans are arranged such that the reader is taken from WARSPITE’s stern (Station 249) to her stem (Station 19 to bow). There is full colour reproduction throughout the book which also contains a stunning 4-page gatefold of the profile draught. There is an introductory section discussing the original design, post-1918 refits and resultant changes in appearance. There are also notes on wartime modifications and action damage. The end-result is a book which provides a unique insight into the anatomy of this very famous and hard-fought ship. Highly recommended.

Brown’s work offers precious insights for readers especially interested in the technical details of a specific class of warship. Film makers, video game designers and model makers will benefit from the intricate detail incorporated in the plans, down to the furniture and accoutrements of cabins and the placement of hammocks.

The reproductions in ‘Battleship Warspite’ are the next best thing to a visit to view the originals in the National Maritime Museum (UK).

Students of naval history – be they professional sailors or armchair admirals – are the lucky beneficiaries of the decision to make these officials plans available to the public in this coffee-table-style book.

With Battleship Warspite we have the chance to witness a real breakthrough as this wonderful volume – in a large format and very well printed – shows an enormous number of plans and schemes related to a single warship: moreover, every page is in full colour and its printing quality is rarely found in similar publications, very often sold on a much higher cost.

Robert Brown, the Canadian author of Battleship Warspite, has both chosen and valourised a great number of plans of this battleship, commenting widely each plan with long and appropriate captions, with tabulated data and good, fitting texts that contribute to make of this book a real “unicum”, inserting the numerous chapters in which the work is divided into a single book of which, until today, the equal was not seen.

There are no words ... Wonderful.

The celebrated battleship Warspite is the ideal introduction to this new series – it is a familiar subject, but this novel form of anatomy will be a revelation to both warship modellers and enthusiasts alike. While the emphasis is on the ship as recommissioned in 1937, after her major reconstruction, sections cover the original design, the ships earlier modifications, as well as detailing action damage and wartime modifications.

Seaforth are to be congratulated on this tour de force, an excellent contribution to naval history besides being a tasty challenge to any model maker.

This addition to the much acclaimed series of books using original builders’ plans is again a publication in association with the (British) National Maritime Museum Greenwich. The NMM holds sets of original builders plans and this book makes available reproductions of the plans for the battleship Warspite – Most Recommended.