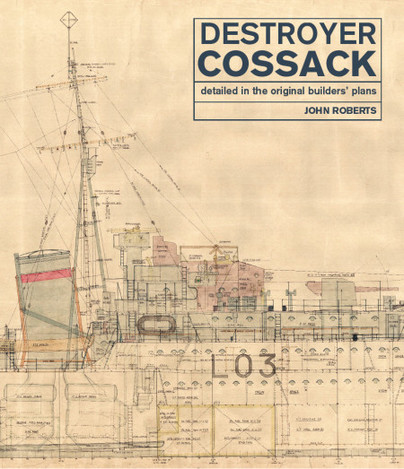 Add to Basket
Add to Wishlist
You'll be £30.00 closer to your next £10.00 credit when you purchase Destroyer Cossack. What's this?
+£4.50 UK Delivery or free UK delivery if order is over £40
(click here for international delivery rates)

The subject of this volume is one of the famous ‘Tribal’ class, large destroyers intended to substitute for cruisers in many roles. Their complicated evolution is fully covered for the first time, with plans of the different proposals and alternatives considered, along with an outstanding collection of detail drawings ranging from magazine arrangements to a view of the variations in upper deck fittings across the whole class. Wartime modifications are also included. Cossack was the obvious choice to represent the class, not just because of her well-known exploits like boarding the German supply ship Altmark in 1940, but also because the technical documentation of the ship is particularly rich, much of which is reproduced in this volume.

This book is a serious piece of research which will stand the test of time. It will be of particular interest to historians who wish better to understand the development of destroyers over the war years, as well as to anyone connected with this famous ship.

More gems to add to our impressive collection of naval plans.

These ships are well represented in the published literature, I have no doubt that it will appeal to destroyer fanatics the world over.

This book is an excellent addition to the series of “detailed in the original builders’ plans” books that provides in-depth coverage of an important class. Highly recommended.

For anyone interested in the anatomy of warships of WW2 then this not only provides amazing levels of detail, but the coloured plans are artistically a pleasure to look at while for model boat builders this is a fantastic resource of plans and information. I genuinely applaud the author, the publishers and the National Maritime Museum for helping share this level of access to share these so much more widely for those who wouldn't have the opportunity to visit and view the original documents in the archives for themselves.

This is another engrossing book in this series, once again providing a fascinating insight into what was hidden behind the metal walls of these famous warships.

A new volume from the very successful collaboration between the publisher and the (British) National Maritime Museum. HMS Cossack was one of the 18 strong class of powerful destroyers known collectively as The Tribals – Most Highly Recommended