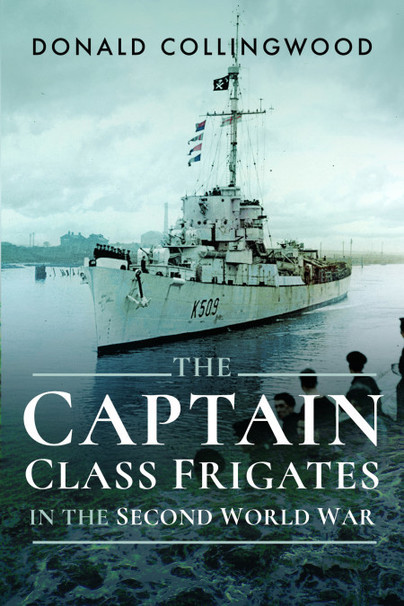 The Captain Class Frigates in the Second World War (Paperback)

Add to Basket
Add to Wishlist
You'll be £14.99 closer to your next £10.00 credit when you purchase The Captain Class Frigates in the Second World War. What's this?
+£4.50 UK Delivery or free UK delivery if order is over £35
(click here for international delivery rates)

The Captain Class Frigates, seventy-eight sturdy, modern Destroyer Escorts, known affectionately by all who sailed in them as the DEs, were built in the United States and leased to the Royal Navy.

This is a story of vigilance, determination and dogged fortitude combined with high skill and unfailing courage. It describes vividly the close teamwork and comradeship which existed within the Captain Class escort groups, as they faced the lethal submarine threat, in all weathers, week in and week out, with all too little opportunity for rest between operations. Without doubt these rugged ships and their resilient crews saved many thousands of lives. In assisting the safe passage of countless troops and the delivery of million tons of vital war materials and supplies across the Atlantic, the Captain Class frigates played a hugely significant role in the Allied victory over the Nazis.

"Collingwood has produced a readable and informative narrative of life at sea in the Captain-class ships on the Atlantic and Arctic convoy routes and the English Channel patrols during the Normandy landings and opening up of the port of Antwerp."

Donald Collingwood joined the Royal Navy in 1937, where he served until he retired in 1961. During 1943 he served on HMS Cubitt protecting convoys in the Atlantic and the Channel.