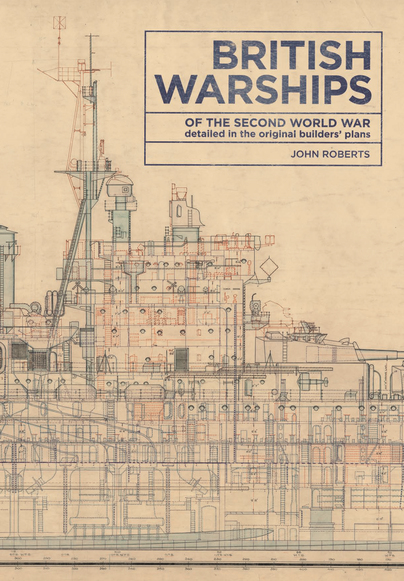 Detailed in the original builders’ plans

Add to Basket
Add to Wishlist
You'll be £24.50 closer to your next £10.00 credit when you purchase British Warships of the Second World War. What's this?
+£4.50 UK Delivery or free UK delivery if order is over £35
(click here for international delivery rates)

This volume reproduces a representative selection of official plans depicting the main types of warship with which the Royal Navy fought the Second World War. Carefully chosen from the incomparable collection at the National Maritime Museum, these range from battleships and fleet aircraft carriers, through cruisers, destroyers and submarines, to examples of the vast array of specialist vessels built during the war.

Concentrating on ‘as fitted’ drawings which show the warships as they first entered service, this collection offers an unprecedented wealth of detail on the equipment and fittings of some of the Royal Navy’s most famous ships. It also documents how their appearance changed over time, since many of the plans include alterations and additions made in different shades of ink and wash, and here printed in full colour for instant understanding of the modifications. With an accompanying text and detailed individual captions by one of the leading experts in the field, this book provides an insight into the warship design process itself, and explains for the benefit of ship modellers and technical historians which types of plan contain the most valuable information.

For anyone with more than a passing interest in warship design and construction, this book will be a revelation.

This is a wonderful book to look at, and the standard of the writing is exemplary; it is highly recommended to anyone with an interest in the conventions and execution of warship plans.

The standard of publishing is faultless, with double page spreads and even a four page gatefold of the Ark Royal. The drawings are a work of art in their own right and this book is a marvellous tribute to the skill of the draughtsmen. Clearly this book will be of particular appeal to the modeller and those with a need for detailed technical information for their research.

A well produced and substantial collection which is an invaluable reference work containing John Roberts' expertise of the ships of this era.

The standard of publishing is faultless, with double page spreads and even a four page gate-fold of the Ark Royal. The drawings are a work of art in their own right and this book is a marvelous tribute to the skill of the draftsmen. Clearly this book will be of particular appeal to the modeler and those with a need for detailed technical information for their research.

There is a wealth of material in this book which will make a fascinating study for anyone interested in the warships operated by the Commonwealth navies during the Second World War and their design processes and it can be read from cover to cover, dipped into from time to time or used as reference work by those who cannot, easily, gain access to the original drawings.

I heartily recommend it to anyone with an interest in British warship design and construction during this fascinating period.

The Seaforth imprint of Pen & Sword has a well-deserved reputation for producing fine studies of naval technology and action. This new book contains well-chosen technical drawings within it as excellent illustration. The author provides a well-balanced review of British Warship design and construction prior to and during WWII. Much Recommended

This is a large scale Volume, about 25 x 20 cm and with some real weight. Over it's 180 pages the book covers a broad range of vessels from the Royal Navy in WWII, with everything from Capital Ships, to Auxiliary AA Ships.

The Illustrations are drawn from original plans held at the National Maritime Museum in Greenwich, and as such are highly detailed. However, their size sometimes makes them of limited use. These were very large scale plans when drawn and the original drawing would have been considerably larger and thus the detail is rather small. This coupled with the fact they have yellowed with age somewhat makes them perhaps not as useful to the scale modeller as they might be. For many of the ships, several drawings are provided, including deck sections and rigging diagrams on occasion. However we d note get a full suite of drawings for any given ship. Also we do not get many ships per section. For instance we get 4 Battleships (Nelson, King George V, Warspite, Renown), 6 Cruisers (Kent, Ajax, Leander, Manchester, Naiad and Cairo) and only one Aphibious Warfare Ship (Bruiser) and one Depot Ship (Adamant).

These niggles aside, this is a beautifully presented book with great sections accompanying the plans that give background and context to each ship and class. It also has to be said that a book covering more ships and classes or full suites of plans of each ship would have a good few thousand pages. So what we have here is an extremely well presented and attractive book with some great information to form the basis of research for the dedicated modeller or just a good book those less interested in utilising the plans will enjoy on it's own terms. Recommended!