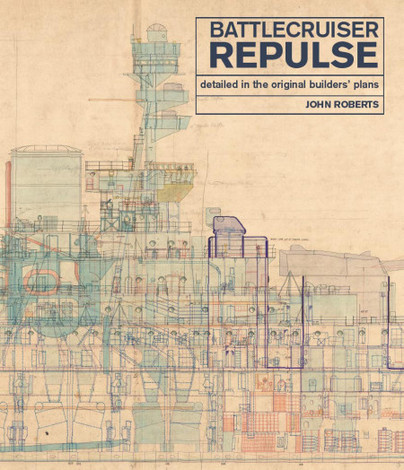 Click here for help on how to download our eBooks
Add to Basket
Add to Wishlist
You'll be £12.00 closer to your next £10.00 credit when you purchase Battlecruiser Repulse. What's this?
Need a currency converter? Check XE.com for live rates

Today's book is part of Seaforth Publishing's "as detailed in the Original Builders' Plans" series. The purpose of this series is to make known the construction plans of a whole series of ships of the Royal Navy (and not only) kept at the National Maritime Museum in Greenwich. This gives the enthusiast a different point of view on the ship (or class of ships) that is covered in each volume. It is certainly not an operational history of the ship, nor does it describe the human experience of its crew or is it a memory of its commanders, but it helps to give an extremely interesting vision of the solutions used to build it and therefore to guide the reader in an experience certainly no less valid than reading a story or memories.

The book is fully up to the high production standards that Seaforth has set. For those interested in the battlecruiser as a concept and the graphical documentation of these complex machines, this title is a must.

This is another fascinating entry in this series, and gives a good idea of the complexity of this ship, and the modifications carried out in an attempt to keep her a viable member of the fleet.

For modelers and students of naval architecture, especially those outside the United Kingdom, these large-scale renderings offer a great primary source previously limited by the size and relative inaccessibility of the originals.

So, what does one make of this book? It is beautifully produced and certainly delivers what it promises in the title. Repulse and Renown represented the epitome of battlecruiser design, and this is amply demonstrated in the technically detailed and well-researched, almost forensic, analysis of the ship’s drawings. Given the proud history of this impressive vessel, it would have been good to learn a little more of her career (there is a two-paragraph career summary, situated midway through the book), but this was not the book’s purpose. Nevertheless, the book represents a serious addition to the present-day knowledge of this famous warship and is a testament to the warship architects of a past era – and to the proficiency of the author.