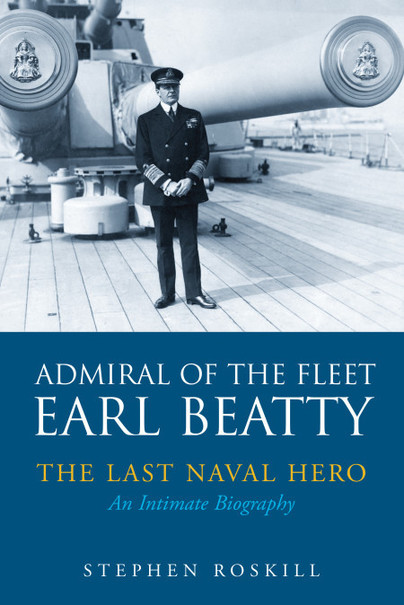 Add to Basket
Add to Wishlist
You'll be £11.89 closer to your next £10.00 credit when you purchase Admiral of the Fleet Earl Beatty. What's this?
+£4.50 UK Delivery or free UK delivery if order is over £35
(click here for international delivery rates)

Admiral Beatty was beyond doubt the best known fighting Admiral, perhaps the best known military leader, of the First World War. His conduct at Heligoland Bight and Dogger Bank, and later at Jutland, caught the public imagination, while his role as Commander-in-Chief of the Grand Fleet in taking into custody the German High Sea Fleet in November 1918 associated him with perhaps the most tangible symbol of the collapse of Germany’s military might. He is probably remembered by most for his comment at Jutland that ‘there seems to be something wrong with our bloody ships today’ after two of his battlecruisers were sunk in quick succession.

Stephen Roskill’s magnificent biography of Beatty explains so well why he has come to be seen as Britain’s last naval hero, an admiral in the mould of Nelson who won the unstinting devotion of all those who served with and under him. He came from an Anglo-Irish military family who exhibited the utmost gallantry on the field of battle with a corresponding recklessness in the hunting field, while he himself was extremely handsome and courageous and exuded charisma. His early promise led to fast promotion and he was to become the youngest Admiral since Nelson.

But that is only one part of the story and there are aspects of his character that were not entirely admirable. There were, and still remain, questions over his handling of the 1st Battlecruiser Squadron at Jutland at which his highly aggressive approach was contrasted with the prudence of his commander, Sir John Jellicoe, and the later animosities between the Jellicoe and Beatty camps reflect poorly on Beatty himself. His turbulent marriage and his extra-marital liaisons were to be suppressed in his official biography but in some ways these aspects are as significant to our understanding of him as Nelson and Emma Hamilton’s great affair is to our reading of the Napoleonic era at sea.

Roskill deals with all these issues and in doing so brilliantly reassesses Beatty place in history. Access to new material at the time of writing allowed him to write a balanced and wholly credible account of an extraordinary life, and this wonderfully readable and ‘intimate’ biography will appeal to a whole new generation of readers.

Originally published in 1980, this biography of Beatty, provides a comprehensive overview of his life and experience of war. He was to be become the youngest admiral since Nelson. It provides detailed and comprehensive testament to the life and role of Admiral, David Beatty. Arguably, of all of the leaders during World War One, few impressed their personality more on the British people than David Beatty. Whatever one's view of Beatty, this book is an important read for anyone with an interest in naval warfare, and - in particular - the story of the Great War. This book provides a perceptive account of one of the most interesting and important naval officers of the twentieth century. As Professor Eric Grove states in the new introduction, this work remains ‘an important book and a major contribution to the history of the Royal Navy in the last century’. The detail of this book is extensively and researched to a quite special level.

An excellent warts and all biography including plenty of detail of his controversial and rather public personal life.It is best however with its description of his time at sea in command of the battlecruisers, the test of war and subsequently command of the Grand Fleet.
An impressive book, which all students of the Great War at Sea should certainly read - most strongly recommended.

This is a very well balanced and honest look at the man and his life, and as such the author has done an excellent job in presenting both the best and the worst of one of the most well-known men of the war.

Beatty is not without his flaws but his leadership is unquestionable and nothing should diminish his outstanding naval service. What also cannot be ignored is that Roskill’s book is beautifully written and immensely enjoyable. This really is a must for any naval history book shelf and is very highly recommended.

This biography of Beatty is a definitive analysis of this complex man, written by a naval historian of impeccable credentials. Roskill substantiates the grandiose title in this work and we come away from the book with an appreciation of Beatty’s triumphs and tragedies, his character flaws and strengths and his intense personal feelings and disappointments. Perhaps he is, after all, The Last Naval Hero.