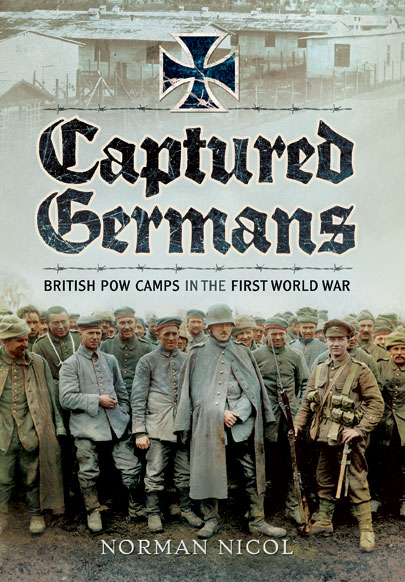 Add to Basket
Add to Wishlist
You'll be £21.00 closer to your next £10.00 credit when you purchase Captured Germans - British POW Camps in WWI. What's this?
+£4.50 UK Delivery or free UK delivery if order is over £35
(click here for international delivery rates)

When we consider prisoner of war camps in the First World War we inevitably think of those on the Continent. We seem to have forgotten that in the UK there were huge numbers of enemy combatants and alien civilians interned in camps right across the realm.

By the end of the war there were almost 500 internment camps in England and Wales, with another twenty-five in Scotland, two on the Isle of Man and one each in Ireland and Jersey. Between them they held around 250,000 individuals.
It is a dark side of history and, for reasons that have never been fully resolved, many of the locations used to intern civilians and combatants during the First World War have been lost in time – until now.

In this proposed title, the author has, for the first time ever, tracked down the sites and history of each of these camps and all the places used for internment purposes in the UK during the First World have been brought together in one document.
As these camps were to be found in almost every region of the UK, its appeal will be equally widespread. For local and military historians, teachers, researchers and archaeologists, this book will prove of immense value.

We must also not forget that for the families of those that were interred this will also be a vital source of information that was not previously readily available. The title will be completed in time for the centenaries of the First World War.


Alphabetically, the book goes into the detail of all the internment camps and locations which the author has researched. The information and detail provided on each is remarkable and is a testament to the work which the author has undertaken. This includes detail on such locations as Birmingham, Epping and Kegworth. Within each camp description are wonderful stories and anecdotes, such as at Larkhill, where in May 1917, Scotland Yard announced that three Germans had escaped from a camp on the eastern side of Larkhill. They had been dressed in their uniforms, but these had been discarded.

The text is complimented by helpful photographs, such as prisoners of war standing in the doorway of Kegworth Camp, as well as various photographs of buildings used for internment; many showing them as they are today, thus making a link between the past and present.

In this authoritative work the author records, in alphabetical order and for the first time in a single volume, the locations of each camp and other places used for housing both enemy and civilians and combatants. This work, which interesting in its own right, is also a superb reference work for anyone undertaking research into this much overlooked subject.

I was aware of the fact that we had POW camps in Britain during the second world war, because there was one directly behind where we lived in Brockworth in the 1950s, an Italian POW camp made entirely of Nissen huts which still stood until the late 1950s/early 1960s when they were cleared for a new housing estate. I have never given much thought to the fact that there may have been POW camps in Britain during the first world war. Norman Nicol's excellent book puts these camps firmly in mind with a close look at how German POWs were treated and housed during the conflict.

This book corrects the serious neglect of its subject. The author has demonstrated that a historian needs only dedication and hard work to research a subject and present it in print. The result is a unique and definitive work that will be of enormous value to other historians, enthusiasts and the families of German WWI POWs – Highly Recommended.