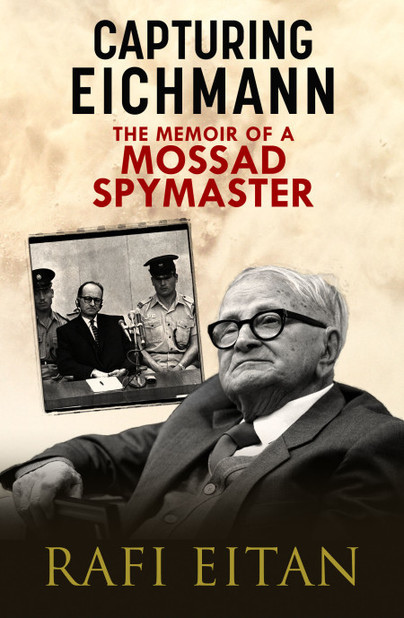 The Memoirs of a Mossad Spymaster

As featured in the Daily Mail: 'How I seized Hitler's Holocaust mastermind as he stepped off a No. 203 bus after identifying him by a photo of his left ear, by Mossad agent Rafi Eitan'

You'll be £20.00 closer to your next £10.00 credit when you purchase Capturing Eichmann. What's this?
+£4.50 UK Delivery or free UK delivery if order is over £40
(click here for international delivery rates)

Argentina, 1960. A car speeds through the streets of Buenos Aires. Inside are four Israeli secret agents and their prisoner: one of the most notorious war criminals of Nazi Germany. The Mossad operatives need to get this man, Adolf Eichmann, back to Israel to be tried for his crimes. Holding Eichmann’s head in his lap is the leader of this ambitious mission, Rafi Eitan, whom Israeli Prime Minister Benjamin Netanyahu later described as ‘one of the heroes of Israeli intelligence’.

In this fast-paced and detailed memoir, Rafi Eitan tells the story of his remarkable life and career as an elite soldier and spymaster. He describes how as a teenager, he smuggled Jewish refugees into Palestine as part of the Palmach unit and how, as a spy in the newly established Mossad, he swam through sewers to blow up a British radar station, earning the name ‘Rafi the Stinker’. He goes on to describe in detail his involvement in the extraordinary hunt for the Nazi war criminal Adolf Eichmann. Eitan's espionage career eventually ended over his involvement in the controversial Jonathan Pollard espionage affair, which sparked intense debate over Israel’s relations with the US.

Packed with new insights into Eitan's role at the heart of Israeli military and intelligence organisations, this is a gripping read and essential reading for anyone interested in espionage history and the daring operation to capture Adolf Eichmann.

Article: 'How I seized Hitler's Holocaust mastermind as he stepped off a No. 203 bus after identifying him by a photo of his left EAR, by Mossad agent RAFI EITAN'

Read the full feature at:
https://www.dailymail.co.uk/news/article-11040735/Mossad-agent-reveals-seized-Hitlers-Holocaust-mastermind-identifying-photo-ear.html

Rafael 'Rafi' Eitan was an Israeli politician and intelligence officer. Eitan commanded the team that captured Adolf Eichmann in Argentina in 1960. Israeli Prime Minister Benjamin Netanyahu described him as 'among the heroes of the intelligence services of the State of Israel'. He died on 23 March 2019.

Anshel Pfeffer is an award-winning British-born Israeli journalist. He is a senior correspondent and columnist for the Israeli newspaper Haaretz, covering military, Jewish and international affairs, and is the Israel correspondent for The Economist.