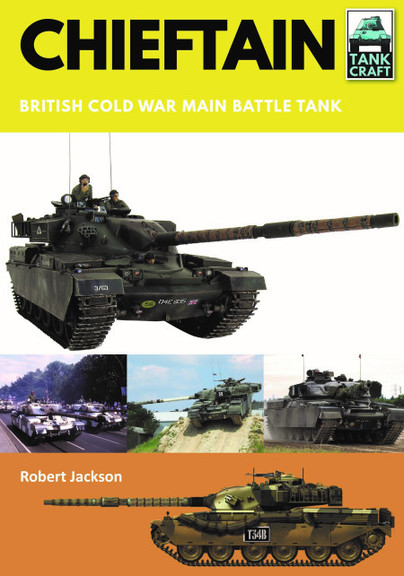 Add to Basket
You'll be £14.99 closer to your next £10.00 credit when you purchase Chieftain. What's this?
+£4 UK Delivery or free UK delivery if order is over £30
(click here for international delivery rates)

The British Chieftain – designed in the late 1950s as the replacement for the Centurion – was perhaps the best main battle tank in service with Nato during the 1960s and 1970s. Its 120mm rifled main gun and advanced armour made it one of the most formidable tanks of its time, and Robert Jackson’s book is an authoritative introduction to it.

Although it was intended to fight Soviet armour on the plains of northern Germany, it was in the heat and sand of the Middle East that the Chieftain fought its major battles during the Iran–Iraq War of the 1980s, and it proved to be very effective during the Gulf War of 1991. Variants of the Chieftain were exported to Iran, Oman, India, Kenya and Nigeria, and its chassis was adapted to fulfil a variety of tasks, including armoured recovery and bridge-laying

As well as tracing the history of the Chieftain, Robert Jackson's work provides an excellent source of reference for the modeller, providing details of available kits and photographs of award-winning models, together with artworks showing the colour schemes applied to these tanks. Each section of the book is supported by a wealth of archive photographs.

So much history and detail in so little pages… Military modellers will love this book. If you’ve built a Chieftain kit before, you’ll love the extra knowledge you’re gain and will want to build another. If you haven’t built a Chieftain kit before, you’ll have ideas, examples and the information you’re need to build a superb model of a superb machine.

This is a great reference book for anyone considering building a model kit, but it's also great for those wanting to include the MBT in a Cold War army, especially for those who plan to play Team Yankee.

I rate this book quite highly because the author's infectious enthusiasm for his subject comes to the fore and it is this method of writing that keeps the reader's attention.

I was impressed at the amount of information and history found in the pages of this extremely enjoyable book. The pictures along are worth the cost of the book. I will find this book indispensible in my library of armor books.

As well as tracing the history of the Chieftain, Robert Jackson's work provides an excellent source of reference for the modeler, providing details of available kits and photos of award-winning models, together with artworks showing the color schemes applied to these tanks.

The book is a welcome addition to the series and fans of British armor will definitely want this one.

The modelling section of Chieftain British Cold War Main Battle Tank is the highlight of Jackson’s book, which after all is intended for military modellers, but the descriptions of the tank and its use are intrinsically interesting for general military history readers... For Cold War enthusiasts and tank aficionados, Jackson’s work will be a welcome addition to their collection.

If the Chieftain is on your tabletop, here's the book for understanding its insides and outsides. Enjoyed it.

Nato's chief battle tank during the 1960s and 1970s... A fitting tribute to one of Britain's foremost technical military achievements.

This book will prove invaluable for model makers building the Chieftain tank. The numerous photographs of the various different versions tells the story of this AFV and the colour illustrations and the completed models show cased are inspirational.

This new book provides much illustration, including many full colour sketches commissioned for the book. As with other books in the Tank Craft series, photographs are of Chieftains and of models built in various scales to reproduce the real tank. There is detailed coverage of available model kits and in the whole this is an excellent treatment of the Chieftain and models of it.

This offering as part of the Tank Craft series from Pen and Sword and authored on this occasion by Robert Jackson is another nice addition to the series. The presentation style does change with each author and I am most familiar with Dennis Olivier’s approach, but I also like the style provided by Robert Jackson in this title. I like that the modelling section is far more informative on the models and covers them in greater detail. The graphic section is also more informative due to the number of angle provided of the tanks.

This series reveals itself, even with this volume, of great interest, both for the collector and for the enthusiast of armored vehicles.

This title is a cracking first port of call for any scale modeller interested in creating a miniature version of the Chieftain, British Cold War Main Battle Tank (MBT). The scale modelling section is full colour with some very high quality modelling on offer.

Robert Jackson is the author of over 80 books on military, aviation, naval and scientific subjects, in addition to twenty works of fiction. He was defence and science correspondent for a major British newspaper publishing group. A former pilot and navigation instructor, he was a squadron leader in the RAF Volunteer Reserve.