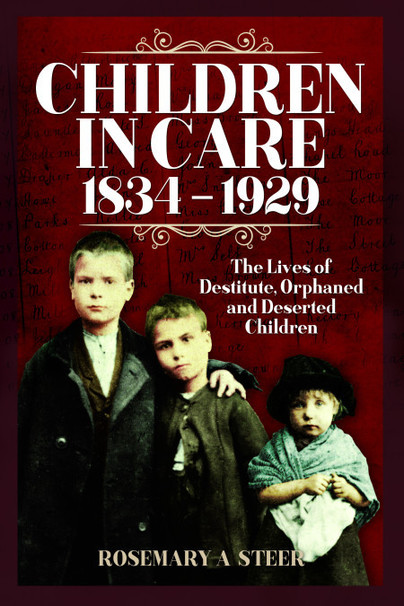 The Lives of Destitute, Orphaned and Deserted Children

For centuries, there have been children who have not lived with their birth parents for a range of reasons and have been taken into the care of the state, voluntary societies, other families or employers, temporarily or permanently.

The origins of this book lie in Rosemary Steer’s study of the lives of over 300 children who came into the care of a charity in the village of Dickleburgh in Norfolk started in the 1870s by the Rector’s wife, Mrs Louisa Brandreth. This book extends the study of children in care across the country to cover the main period of the Poor Law Amendment Act (the ‘new poor law’) from 1834 to 1929. Using a wide range of sources including contemporary social commentaries and enquiries, poor law records, charity case files, court records, newspapers, parliamentary enquiries, census returns, parish records and personal accounts, Rosemary Steer details the range of provision and explores the lives of some of these children, before, during and after their time in care.

Research into the care of pauper children has usually been anonymised, but Children in Care includes examples of named children, and through numerous case studies, we hear these children’s stories, sometimes in their own words or those of the adults who had charge of them. It is unlikely that many of these pauper children would feature in any other study, other than individually within the context of family history, so this book also has the benefit of highlighting the lives of some of the least regarded of society.

About Rosemary A Steer

Rosemary Steer qualified as an archivist in 1978 and moved to Suffolk in 1985 to set up the Lowestoft Branch of Suffolk Record Office. After a stint as operational manager of the three branches of Suffolk Record Office, she ‘crossed the floor’ into library management, still in Suffolk, during which time she completed an MBA (Public Service) through Henley Management College. She retired from Suffolk County Council in 2011.

Rosemary is now a freelance researcher and lecturer focusing on social and family history. She completed her master’s degree in family and local history at the University of Dundee in 2014, researching the Dickleburgh charity for destitute and workhouse children for her dissertation. She is now a teaching fellow at the University of Dundee on its online Family and Local History postgraduate programme.