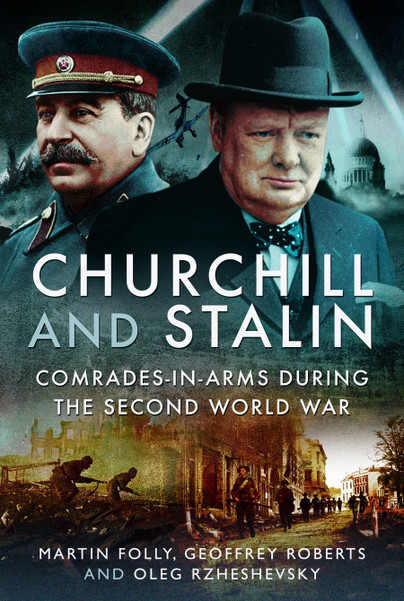 Comrades-in-Arms during the Second World War

You'll be £25.00 closer to your next £10.00 credit when you purchase Churchill and Stalin. What's this?
+£4.50 UK Delivery or free UK delivery if order is over £35
(click here for international delivery rates)

Order within the next 11 hours, 35 minutes to get your order processed the next working day!

Based on documents from the Russian archives, this comprehensive study charts the tumultuous wartime relationship between Soviet dictator Joseph Stalin and British Prime Minister Winston Churchill. It highlights the secret correspondence between the two leaders, records their meetings and conversations in Moscow and at the Tehran, Yalta and Potsdam summits, and discloses the confidential communications of Stalin and his diplomats.

Churchill and Stalin has been compiled and edited by three leading Russian and British historians of the Second World War. Their narrative brings together military and political history, documentary analysis and biography in an illuminating way. It reveals how Stalin and Churchill clashed and collaborated in order to achieve victory, and it demonstrates the deep personal relationship between these two great personalities as well as their profound political differences. Even when the Grand Alliance collapsed after the war, they retained their respect and affection for each other.


Overall, the book provides an important resource for studying one of the most important facets of Second World War diplomacy, and conveys the abiding message that national leaders can transcend their differences to work towards a common goal.

"We take for granted how difficult wartime diplomacy can be, especially when the outcome is not yet foreseeable. In these pages readers can begin to get a good idea of what thoughts plagued these two men as they tried their best to create some type of alliance and 'friendship' while planning for the postwar period."

WWII and Other Book Reviews

After a 70-page outline of the relationship using mostly Western sources, the book then provides a 200-page commentary going back over all the key stages, quoting extensively from a collection of Soviet documents from Rzheshevsky's previous Russian-language books. These include records of the conversations between the two leaders when they met.

From this commentary, many new insights emerge. Most fascinating is to follow the to-ing and fro-ing between the two leaders. Stalin could be blunt, coming on rude. Churchill was upset by this, but was expansive, often full of what Eden called 'guff '.

Churchill and Stalin provides an intriguing and detailed insight into how two of the 20th century's leading figures presented their cases to each other and negotiated their positions. Accounts of their face-to-face meetings are fascinating.

Churchill and Stalin is a valuable read for anyone interested in the diplomacy of the “Grand Alliance” or in the workings of any alliance.

This book offers an intriguing combination of political and military history, biographies of this dynamic duo and key contemporaries, and insightful analysis of research materials.

The authors’ structure the story by opening with a long introductory chapter that surveys all the Churchill-Stalin meetings. They then walk the reader through each meeting, illustrating their account with documents from both British and Russian sources. For the crucial first meeting in August 1942 their documents provide a more textured account than those in the published Churchill papers. The careful analysis and documentary presentation makes this a very useful account of the Churchill-Stalin relationship.

This is obviously by the title a look at the relationship between Churchill and Stalin, but it’s not just an ordinary look at a relationship, this book very much looks at the relationship via the medium of agreements, correspondence and compromises during WW2. Obviously Russia and Britain were close allies and they had a number of meetings and negotiated agreements such as Tehran, Yalta and Potsdam, well this clearly all needed debate and compromise and in this book the authors go through a large number of these. Which was very informative and interesting although I must admit it all got a bit heavy in places and I would say that this book was more intended for those who like negotiations and compromise or those with a love political relationships. I would say that it was an excellent idea to have the three authors write this book together because I imagine it took an awful lot of research and reading to get through it all, but this comes out in the writing because the book is very well written, the research clearly comes through. Also with all the access to primary resources they must have had, this book is of high quality and should stand the test of time for a long while. There is an excellent list of maps in the book and a brilliant section of notes, which I think if you were a politics student you would find fascinating. Whilst I am not going to say this was my favourite book, I am going to say that I would recommend it to others especially those specialising in politics and international cooperation.

Churchill and Stalin: Comrades-in-Arms during the Second World War by Martin Folly (Brunel University), Geoffrey Roberts (University College Cork), and Oleg Rzheshevsky (author of Allies at War: The Soviet, American, and British Experience) is a documentary history of Anglo-Soviet relations during the conflict. The first two chapters of the book provide a narrative summary of the war-time relationship while the following chapters provide reproductions of more than 130 documents. These documents include the Churchill-Stalin correspondence and meeting transcripts, including the Eden-Stalin meetings of December 1941, the Churchill-Molotov meetings of May-June 1942, and Churchill-Stalin meetings and conversations in Moscow, Tehran, Yalta, and Potsdam. The volumes includes a short 4-page chapter covering Churchill, Stalin, and the Cold War. Churchill and Stalin: Comrades-in-Arms during the Second World War joins the recently published Complete Maisky Diaries and The Kremlin Letters: Stalin’s Wartime Correspondence with Churchill and Roosevelt in providing researchers and readers alike with access to the primary sources that document the relationship between Churchill and Stalin during the war.

The definitive documentary on the relationship of Churchill and Stalin during WWII, produced by a team of three co-authors combining their specialist skills. The alliance between the Soviets and the Western Allies was a case of ‘my enemy’s enemy’. – Highly Recommended.

Geoffrey Roberts features as expert in 'When should countries intervene in others' affairs?' article

A very good insight into the characters and the context of these two leaders during and after WW2. Clearly both distrusted the other, were fundamentally opposed in their politics yet necessity demanded that they cooperate to defeat the greater shared enemy. Both Stalin and Churchill can be accused of taking stances and decisions that at times were for their own respective benefit but it would have been surprising had they not done so. A good read and a valuable resource for the period.

Dr Martin Folly Is a senior lecturer in History at Brunel University London and an active member of the Isambard Centre of Historical Research. His work centres on the perceptions and attitudes that shaped relations between the United States, Soviet Union and Great Britain during and immediately after the Second World War, and his publications include The United States and World War II.

Professor Oleg Rzheshevsky was one of Russia’s leading experts on the Second World War. His many books include War and Diplomacy: The Making of the Grand Alliance, Voina, 1941-1945, Stalin i Cherchill, and Allies at War: The Soviet, American and British Experience (with Warren Kimball and David Reynolds).