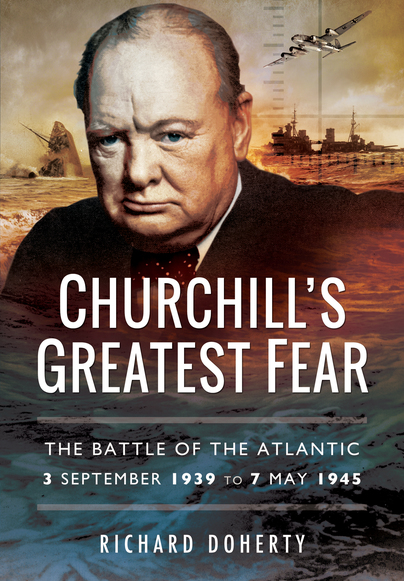 Add to Basket
Add to Wishlist
Due to an unforeseen printing error, pages 273-275, which contained the notes for chapters 2 to 5, appear blank in the printed copy of this book. Anyone wishing to view these missing pages can click here for a PDF version of them.

Printed hardcopies of these pages can be posted to customers by request – please contact enquiries@pen-and-sword.co.uk if you would like to be sent a printed copy.

We apologise for any inconvenience this may cause.

You'll be £25.00 closer to your next £10.00 credit when you purchase Churchill's Greatest Fear. What's this?
+£4.50 UK Delivery or free UK delivery if order is over £35
(click here for international delivery rates)

Order within the next 6 hours, 19 minutes to get your order processed the next working day!

The Battle of the Atlantic (Churchill's term) was arguably the pivotal campaign of the Second World War – it was certainly the longest starting with the sinking of RMS Athenia on 3 September 1939 and ending with the torpedoing of SS Avon Dale on 7 May 1945.

This superbly researched work covers all the major aspects of The Battle, balancing the initial advantages of Admiral Doenitz's U-Boat force, the introduction of the convoy system, the role of the opposing surface fleets and air forces, relative strengths and the all important technical developments. Intelligence particularly the Bletchley Park intercepts played an increasingly important part in the final outcome.

The author concludes that May 1943 was the moment when the Allies seized the initiative and, despite desperate German efforts, never lost their advantage.

Using official records, personal accounts and a wealth of historical research, this work gives the reader a splendidly concise yet broad account of the course of the campaign, the men who fought it on both sides and the critical moments and analysis of the outcome.

Author article: ‘Seventy-five years ago today, the German navy surrendered on Northern Ireland soil. But why was Londonderry chosen?’ as featured by

As a result this is a useful volume, and included material that I'd not come across before.

Despite the many acronyms used, the book is easy to read and would suit a newcomer to the subject as well as those well read in the subject.

Many books have been written about The Battle Of The Atlantic which has been described as the pivotal campaign of WWII. However I feel that this publication ranks among the best. Yes it gives numbers of ships sunk and tonnage lost, U-Boats destroyed and crews killed but all through the book there are other snippets of information that I haven’t seen before. Superb research by the author makes for a very interesting and enjoyable read in my opinion. I can recommend this publication.

The battle of the Atlantic was crucial. Had German U-Boats succeeded in preventing all food and supplies reaching Britain then the outcome may have been very different. This is the story of how the watery cat and mouse game was played out at the end of which 90 percent of U-Boats had been lost plus large numbers of Allied merchant shipping and their crews.

This book covers the longest battle of WWII starting with the sinking of RMS Athenia on the first day of the war and with approximately 3,000 more sinkings continuing right up to the SS Avon Dale in the final days of the war. However it was not known as the Battle of the Atlantic until Churchill coined the phrase officially two years after it started. It is an aspect of WWII that was initially only known and written about individually as a series of convoy actions, scientific developments, political and inter-service wrangles and secret operations. What this writer (and a number of others) has done is to draw all these threads together in a complete narrative. The title is taken from Churchill’s statement “The only thing that ever really frightened me during the war was the U-Boat peril”. Although both Hitler and Churchill interfered in maritime matters, we should perhaps be grateful that the former was a land strategist...

... Richard Doherty, recognised as Ireland’s leading military historian with over 27 titles to his credit (although this appears to be his first foray into the naval/maritime market) is one of a number of authors to tell the complete story...

... What Doherty has done in his 14 chapters and 271 pages is produce a very readable account of all these aspects of the battle for its entire duration starting with the lessons of WWI and ending with a short analysis of the outcome and a brief what if scenario. What he does not do is to provide an in depth analysis of whether things should have been done differently and whether, with the resources available, they could have been...

Richard Doherty lives in Northern Ireland and has earned a considerable reputation writing a number of books about military history, especially on subjects with an Irish theme. This well-researched book describes the Battle of the Atlantic and it has a bibliography that rubs to eight pages of published and unpublished sources including web sites; end notes and a well structured index...

... Overall this book is worth reading as a concise history of the battle which adds useful material to earlier works on the subject.

The Battle of the Atlantic was crucial. Had German U-Boats succeeded in preventing all food and supplies reaching Britain the outcome might have been very different. This is the story of how the watery cat-and-mouse games was played out at the end of which 90 per cent of U-Boats had been lost plus large numbers of Allied merchant shipping and their crews.

This hard-cover book is very clearly a well researched story which does an excellent job of explaining just why the Battle of the Atlantic was expressed by Churchill as his 'Greatest Fear'. Presented in a very readable style, the author, and please excuse my intentional pun, explains the ups and downs of the war across the Atlantic. It is not just a story about convoys, nor just a story about U-Boats and nor is it the recorded memories of individuals who experienced the battle. This is a well detailed overview of all the different aspects of what was a vital part of the story of WW2 for the survival of the UK, and the ability to carry on fighting the war...

... There is so much to this story, which lasted from the beginning to the very end of the war that this makes for fascinating reading. Some of the facts and figures make for staggering reading, with the millions of tons of shipping sunk, let alone the number of human casualties. There were the changes in equipment, the development of new tactics and also the chance in some cases of the right person being in the right job at the right time. The author has clearly put a lot of effort into the research behind this new book, and it makes for a well written read, which mixes all those different elements in a well balanced text, packed with information and interest about a complex story.

Richard Docherty's 314-page work mostly, though not exclusively, looks at Britain's decisive battle of WW2 through tactical and strategic eyes of those directing affairs down to the escort commanders accompanying the convoys and U-boat skippers, rather than the ordinary matelot or U-bootsmann and that makes for something of an interesting change and perspective as a lot of the focus in recent writings has been on the human history of the battle, not the higher level co-ordinating it.

'It is a highly researched and extremely detailed argument...'