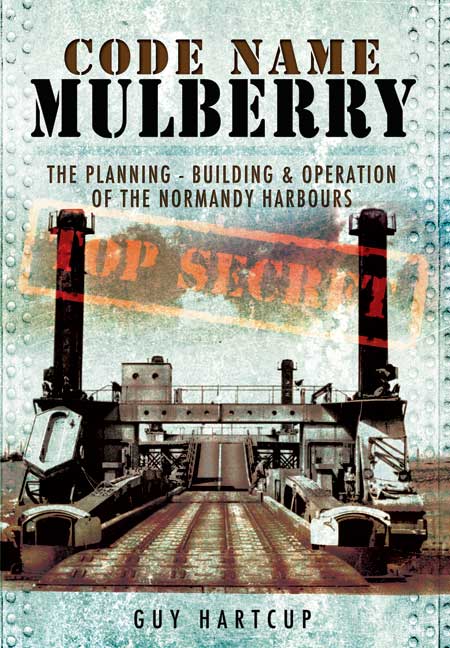 The Planning, Building, and Operation of the Normandy Harbours

Add to Basket
Add to Wishlist
You'll be £12.99 closer to your next £10.00 credit when you purchase Code Name MULBERRY. What's this?
+£4.50 UK Delivery or free UK delivery if order is over £35
(click here for international delivery rates)

The story of the Mulberry harbours must rank among the most remarkable to emerge from the Second World War. In terms of engineering achievement, it is surely one of the greatest of all time.
Allied planners correctly anticipated that the Germans would deny, either by destruction or dogged defence, the vital Channel ports in the aftermath of D-Day. If the invading armies could not be kept resupplied, OVERLORD would fail. The only solution was to design, build, transport and install two massive artificial harbours.
How this highly ambitious plan was implemented is told with clarity and authority in this superb book. The text, admirably free of unnecessary technical jargon, is well supported with photographs, diagrams and tables, which demonstrate vividly the scale of this great venture.
The irony is that the real enemy turned out not to be the Germans but the elements. Code Name Mulberry is a first class account of all aspects of this extraordinary chapter in the history of the Second World War.

The book only counts 160 pages, but is chock full of interesting facts, supported by drawings, photos and maps.

This excellent publication is a very welcome reprint of the 1977 edition of Guy Hartcup’s highly successful volume telling the detailed story of the famous Mulberry Harbour – a temporary harbour, that many consider to have been the most remarkable combined engineering and logistical achievement of the Second World War.

Following the unsuccessful raid on Dieppe in 1942, the allies realised that their task of capturing a port on the North coast of France was not going to be an easy one and therefore if they wanted to initially unload men, their vehicles and equipment and then successfully continue to re-supply them following the invasion, a suitable alternative had to be found.

The concept of building two artificial harbours was muted. Of course this was drastic measure and would be no easy feat, however under a cloak of secrecy and with the backing of Winston Churchill, the design, trials and construction took place at locations around the British Isles and just three days after D-Day, the components, which included over 30 jetties, around 10 miles of floating roadways, constructed out of no less than 600,000 tons of concrete were brought together and once successfully towed across the channel, were assembled at Arromanches and Omaha Beach.

When you consider the scale of the project, the potentially bad weather and poor sea conditions, together risks of attack from the air or by sea, it was remarkable that the harbour survived the crossing at all. Following a severe storm, the harbour at Omaha Beach was destroyed sooner than expected, therefore leaving the harbour at Arromanches to handle no less than 2.5 million men, 500,000 vehicles, and 4 million tonnes in the following 100 days!

This splendid book will no doubt appeal to a wide range of readers with an interest in both the Normandy Landings and Second World War in general, however it will also intrigue those with an engineering mind too, as it includes fascinating architects drawings and pictures whilst describing in detail, not just the men who made this miracle possible, but they methods used too.

WW2 enthusiasts – buy it now before it goes out of print again!

Guy Hartcup writes a new book here based on the technical means developed by the British during World War II. Through this book, he develops a scientific manner of the creation, installation, and the influence of artificial harbors, on the victorious ally in Western Europe. Many sketches and drawings embellish the text. The author explains the impact of weather conditions (tides, storms, bad weather...) on these two ports as one of the two ports as one of the two, american sector, did not resist the severe storm that hit the coast to mid-June 1944.

This slim volume is the second reprint of a 1977 edition, but for a fascinating tale at such a very reasonable price, well worth the effort. It is fascinating from at least the three viewpoints: as the story of those vital temporary harbours that allowed three armies, with all their equipment, to invade occupied France in difficult weather across open beaches on the Channel coast; for the usually unappreciated and highly complicated lengthy advance planning that went into the project; and for the format of the story as told by historian Guy Hartcup.
A shortage in steel for constructing floating and supported roadways from ship-to-shore, for example, was resolved by the use of concrete, both for breakwaters (the huge Phoenix barriers) and for the floats supporting the roads. This in turn, led to further complications because there wasn't enough sand of the quality normally required for high performance concrete forms. Instead, slag from mines had to be used.
The amazing thing in reading all this was how adaptable almost everyone was.
Everyone with a historical bent knows of these two Mulberry harbours, but this is an unusual close-up of the actual story, and well worth acquiring.

The story oi their design, construction and use mustrank amongst the most remarkable to emerge from the Second World War – a story detailed here by Guy Hartcup.

A fascinating insight into the engineering and production background of the development of the Mulberry Harbours. I found this a very interesting book and certainly one worth reading. It is good value for money.

Guy Hartcup was a published author of long standing and the leading authority on the MULBERRY story.