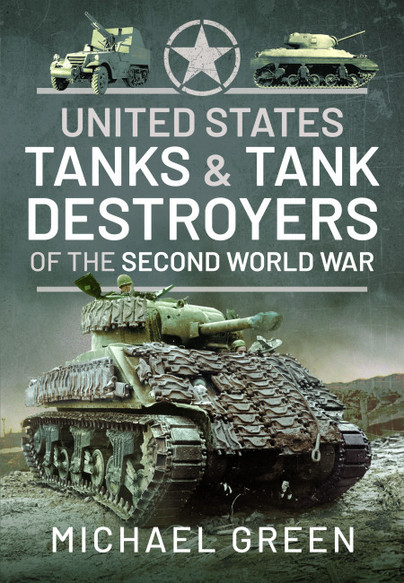 Add to Basket
Add to Wishlist
You'll be £25.00 closer to your next £10.00 credit when you purchase United States Tanks and Tank Destroyers of the Second World War. What's this?
+£4.50 UK Delivery or free UK delivery if order is over £40
(click here for international delivery rates)


"This illustrated volume covers American tanks and tank destroyers in great detail. The characteristics and service of each type receives attention."

"A highly readable narrative supported by excellent photographs and vast attention to detail. The level of detail would prove very helpful to the scale modeller as well thus this work is a must for the bookshelf of the tank enthusiast."

"Green presents a well-researched, highly readable review of tank development during World War II. This work will appeal to maneuver commanders seeking to enhance their understanding of tank development, employment and the vital role of field feedback to improve design and modifications of a given tank."

What a fascinating book, in many ways this book could be taken as the big brother to the TankCraft Series of books, the book runs through the range of American built tanks from light to heavy. In this very well written book, I was impressed with the descriptions and the fact that each chapter was broken into questions or topic sections which made it far easier to read and understand. The number of photographs in the book were also excellent from tanks in action to photography of practically every part of the tank. The main photographs were b/w but it was supported by a good number of colour photographs too. My close up knowledge of tanks has improved by reading Pen & Sword Books, but this book I feel has further enhanced this knowledge. In my opinion, this book is ideal for beginners to the subject and by that I mean the information was very credible from an author who certainly knows his stuff.

If you ask a non-modeller about tanks produced by the Americans in World War II, I suspect most are only going to know about the Sherman. However, they produced a wide variety of vehicles, some more successful than others and which can be said has taken them on a journey from out of date World War I tanks to the early heavy tanks of the Cold War. This title is a one stop mini visual reference, covering the tanks and tank destroyers used by the Allies during World War II and without which the result of the war could have been very different.