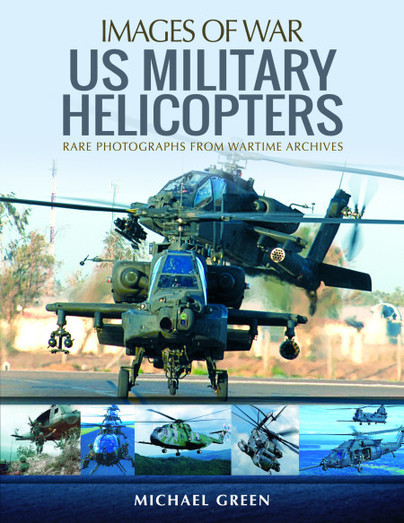 You'll be £16.99 closer to your next £10.00 credit when you purchase US Military Helicopters. What's this?
+£4.50 UK Delivery or free UK delivery if order is over £35
(click here for international delivery rates)

The helicopter came on the scene too late to play other than a minor role in the Second World War but by the Korean conflict the Bell H-13 Sioux, OH-23 Raven and Sikorsky H-19 Chickasaw were in service.

It was in Vietnam that the US military helicopters really came into their own and the best known were the Bell UH-1 Iriquois (known as the Huey), the Boeing CH-47 Chinook and the massive CH-37 Mojave. The USAF combat search and rescue Jolly Green Giant was indispensable.

Attack helicopters have evolved from the early Huey Cobra or Snake and the Boeing AH-64 Apache came into service in the late 80s when the Sikorsky UH-60 series became the military general purpose chopper.

All these formidable aircraft and many more are covered in detail in this superbly illustrated and comprehensive book.

This book provides an excellent reference on helicopters in US military service. It provides information on mos, if not all of the types that have carried US military markings, from the Sikorsky R-4B Hoverfly to the latest version of the Apache.
There are plenty of interesting photographs among the 225 provided, including some of the 160th Special Operations Air Regiment.

This book is thoroughly recommended to all aircraft fans, especially rotorheads!

Every chapter describes the evolution of the various helo types (utility, naval, attack) and a wonderful collection of photos completes in the perfect way, this is a very nice book.

A treat for anyone who, like me, has a passion for military helicopters, this book is very much what it appears to be, 220 pages full of useful pictures and information on the US Army, Navy, Air Force and Marine Corps's rotor-based aircraft.

A new addition to the very popular Images At War Series that includes mostly full colour photographs. The helicopter story has developed since 1945 and rotary wing aircraft have made some impressive advances which are nicely detailed in this new book, with some clear introductory text, good captions and extended captions, with some longer sections of text. As always the images are outstanding. – highly recommended.

As well as the background texts for each chapter, the plentiful photos are a mix of archive shots and more modern colour photos of preserved examples in various museums. All are well captioned and these add even more information to that contained in the background text elements. An interesting subject, some excellent photos and written by an author who clearly knows his subject.