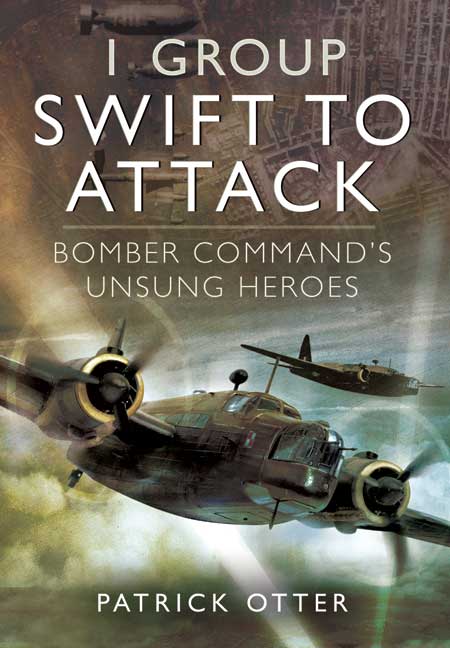 Add to Basket
Add to Wishlist
You'll be £17.50 closer to your next £10.00 credit when you purchase 1 Group: Swift to Attack. What's this?
+£4.50 UK Delivery or free UK delivery if order is over £35
(click here for international delivery rates)

Patrick Otter presents us here with a wellresearched and accurate account of the largely 'forgotten heroes' of 1 Group, RAF Bomber Command during the Second World War. The narrative moves at a lively pace, combining appropriate levels of detail regarding operations, aircraft, bases and incidents, with background details that set the squadron's exploits within the wider context of unfolding war.

Aerial combat reached an entirely new level during the Second World War, conducted on a scale never experienced before, powered by a range of technological advances. Against this backdrop, tales of the sheer determination and bravery of young British, Commonwealth and Polish aircrews are relayed; these were men who never hesitated when it came to giving all they had to the cause of ultimate victory, regardless of the personal cost.

This is an overdue tribute to a major contributing factor towards the ending of the Second World War in Europe, highlighting the superiority of the RAF equipment made available and tactics adopted as the war developed. The humanity and professionalism of the participants, flung against amazing odds, shines through and a real feeling of engagement at the forefront of events is conveyed through these tales of squadron fraternity amongst the men of 1 Group.

Complete with maps and photographic illustrations throughout, it serves as a fitting tribute to this particular branch of Bomber Command, their losses, victories and enduring legacy.

The author's research into the experiences of some of the crews adds the personal touch and the ground crews are not neglected. This book is a valuable addition to the works on the RAF and is recommended to anyone with an interest in the subject.

A comprehensive and intensively researched account of the largely 'forgotten heroes' of the RAF's 1 Group, Bomber Command, during World War Two. The accuracy and level of detail Patrick achieves is certainly not something you find in every book on this subject, and the narrative moves at a lively pace, charting operations, aircraft used, bases and incidents, with background details that set the unit's exploits within the wider context of the unfolding war. An overdue tribute to those who contributed so much towards the ending of the war in Europe. The book is complete with maps and numerous rarely seen photographs.

Drawing from interviews with veterans and squadron records, the author has skilfully used many first hand descriptions to focus on the stories of the courage and daring. They make for exciting reading. Patrick Otter points out it took a special kind of courage to climb into a plane night after night, knowing the odds of survival diminished with each operation. By writing Swift To Attack, Patrick Otter has done their memory and courage a huge service as well as producing a highly readable book.

Comprehensive and insightful account. Throughout, personal biographies are brought to life with the help of the resources that Otter has painstakingly gathered for the project. This book will appeal to any aviation enthusiasts, not least for the abundance of black and white images compiled within its pages. An essential resource for future researchers of the subject.

I was amazed at the quality and quantity of the hundreds of photographs illustrating all aspects of what life offered Bomber Command. The author writes with the fluid confidence of a master of his subject.

The author, a professional journalist, has written a comprehensive account of the exploits of 1 Group Bomber Command, with a special focus on the men who contributed to its exploits.

This 368 page hardback book reflects well the outstanding bravery of the aircrew who faced a living hell every night over enemy-occupied Europe, yet who somehow managed to complete their missions, navigate their way back to base, avoiding flack and enemy night fighters, often flying through appalling weather, and in all too many cases then facing disaster in the last few minutes of a night-long mission. Patrick Otter tells the tale with passion as well as an eye for detail, which makes the volume very readable. He is well qualified to write such book for he has become an expert on Bomber Command and in particular the history of the wartime Lincolnshire and Yorkshire airfields. This is a truly fitting tribute to everyone who served in 1 Group during the Second World War.

By Writing Swift to Attack, Patrick Otter has done their memory and courage a huge service, aswell as producing a highly readable book

Drawing from interviews with veterans an squadron records, the author has skilfully use many first hand descriptions to focus on stories of courage and daring (along with a few amusing adventures) among the men of 1 Group. They make for exciting reading… Swift to Attack carries a foreword by Air Vice Marshal Stuart Atha, Air Officer Commander of 1 Group in 2012 who describes the book as an invaluable record, adding that “one cannot fail to be humbles and moved in equal measure by tales of individual heroism and collective sacrifice” It also contains a historically valuable glossary detailing each local air base and squadron data.

A Compelling history of the RAF in northern Lincolnshire during the Second World War is soaring into the bestsellers lists… The book contains about 300 photos and was edited by RAF expert Richard Gardner, with a generous foreword by Air Vice Marshal Stuart Atha.

This remarkable effort on part of Patrick Otter manages to convey the geography of the aerodromes from which they flew, the individual battles and the horrors aircrew had to suffer. The account further gives those warriors now long gone a voice allowing the Reader to follow the campaign and very much feel part of the Battle helping us to relive and not forget the sacrifice made.