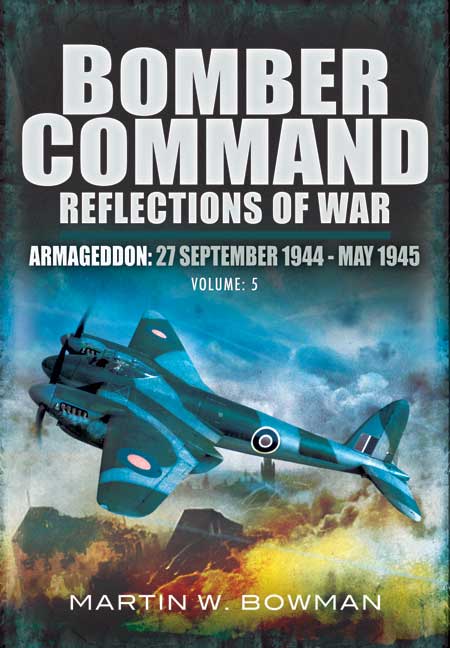 This is the fifth release in a series that provides a comprehensive insight into all aspects of RAF Bomber Command in World War Two. It begins in late September 1944 when the Allied Bomber Offensive was at its height, and takes us through to the end of the conflict. The crews' personal narrative puts you at the centre of each intense, isolated and harrowing episode of aerial combat as the pilots of Bomber Command attempted to stave off fears of tragic injury and death from fighters, flak and incessant operational pressure during raids on German cities, waterways, ports and oil installations. This continued until the Luftwaffe and the Nachtjagd effectively ceased to exist, their fuel supplies exhausted, their losses in airmen reaching an unsustainable level, and their aircraft and airfields decimated as a result of 24-hour Allied bombing.

Often, it was the most exciting feats of bravery, determination and daring that were marked by the most catastrophic losses. Approximately 62 per cent of the 125,000 men who served as aircrew in Bomber Command during the war became casualties. Of these, 52 per cent were sustained while flying operations and a further ten per cent while on non-operational flights in Britain. It should never be forgotten that RAF Bomber Command played a hugely significant role in securing victory for the Allies, carrying out mass raids by day and night that eventually culminated in them 'beating the life out of Germany'. Yet its crews were denied the campaign medal that they so richly deserved, until very recently. Here, Martin Bowman attempts to provide an adequate tribute to the men of Bomber Command, using first-hand accounts to capture an authentic commentary of the times at hand in a release that is sure to capture the imaginations of all aviation enthusiasts.

This is the fifth and final volume of a five part work provides a comprehensive insight into all aspects on RAF Bomber Command in the Second World War.

The crews' personal narrative puts you at the centre of each intense and harrowing episode of aerial combat. The first hand accounts capture an authentic commentary of the times, in a superb series that will become a Bomber Command classic.