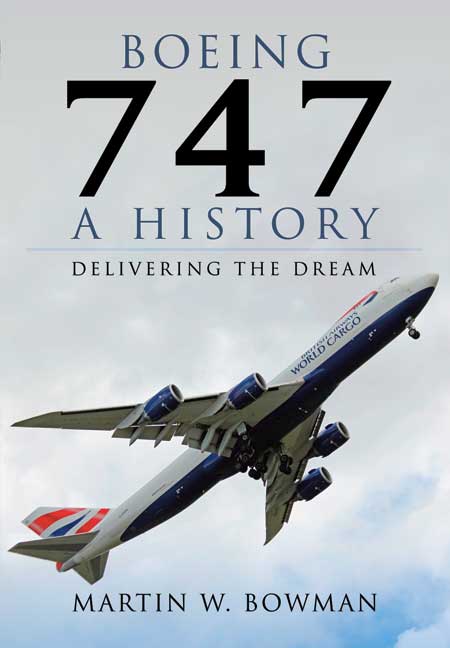 As featured in the Mail Online: 'The plane that shrunk the world: The innovative Jumbo Jet first took to the skies for its inaugural test flight just after 11am on 9 February 1969.'

You'll be £3.99 closer to your next £10.00 credit when you purchase Boeing 747: A History. What's this?
Need a currency converter? Check XE.com for live rates

There is perhaps no other commercial airliner as iconic as the Boeing 747. A presence in our skies for over forty years, it has transported hundreds of thousands of passengers across the world. From its introduction with Pan American Airlines in 1970, it has persevered as one of the forerunners of commercial flight. Often labelled the 'Queen of the Skies', this is an aircraft revered by passengers and aircrew alike. The first wide-body airliner ever produced, it has set new standards in air travel and opened up the air routes of the world to vast numbers of people who might otherwise have been unable to afford international air travel.

The book focusses not only on the iconic 747, but also its many variants, including the YAL-1A, which Boeing developed for the US Air Force, and the Evergreen 747 Supertanker, a 747-200, modified as an aerial application for fire-fighting. Across its types, the 747 carries around half the world's air freight. Accordingly, freight variants feature here too, including the 747-8.


The sheer size of the workload carried out by this craft is astounding. From the glamorous 1970s, an era of rapid expansion which saw an unprecedented boom in the tourist trade, to the various environmental and economical imperatives that impact upon modern flight, this work shows how the Boeing 747 has been developed in accordance with the changing demands of the ages. Bowman here preserves the history of this celebrated craft in style, presenting an exciting and comprehensive account that is sure to appeal broadly.

As featured in Norwich Evening News and Iceni Magazine.

This comprehensive and illustrative book is a must for all fans of the 'Queen of the Skies'.

In his book, Boeing 747 A History, Martin W. Bowman covers the process of making the design a reality in great detail, with plenty of archive images of the new Everett facility and the first production aircraft taking shape.

...Martin W Bowman’s book, published by Pen and Sword, is an impressive hard-back companion to one of the best-known aircraft to have ever graced our skies. It covers the development and service life of the 747 in detail, packed throughout with archive and colour photographs.

Appendices are packed full of statistics and timelines, and unusual chapters wax lyrical about the joys of being a pilot flying a 747 into Hong Kong, and the day in the life of ground operations handling 747s at Amsterdam Schiphol.

...A thoroughly recommended book which should be on any aviation enthusiast’s bookshelf.

A very interesting book, especially successful in analysing the Jumbo genesis and its development.

A book about one type of airplane? At first I was afraid of an endless list of facts. But the development and course of life of this iconic plane however read like a novel: red ears from time to time, a lot of astonishment and sometimes straight emotion!

The author has provided what may prove the definitive history of the 747, and the most comprehensive and understandable review of one of history's most impressive aircraft. This is not just a book for the aviation enthusiast, but a history for all those who flew in the aircraft, those who will fly in the future, those who see it pass over, a very wide readership and a book that deserves to be widely read.

This is a marvellous book, superbly researched and illustrated, with an appeal far beyond aviation book lovers.