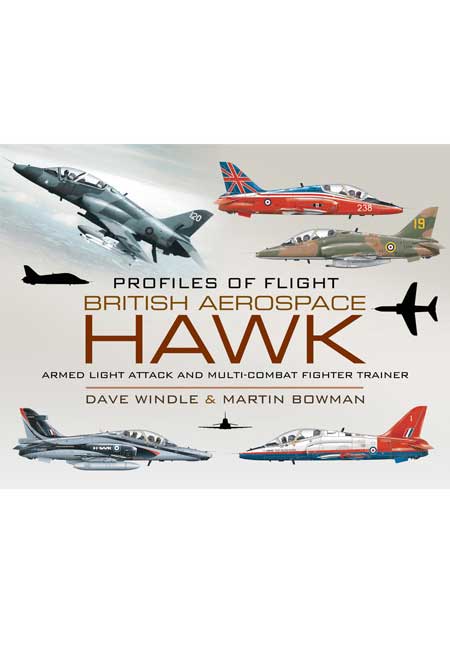 Add to Basket
Add to Wishlist
You'll be £19.99 closer to your next £10.00 credit when you purchase Profiles of Flight: British Aerospace Hawk. What's this?
+£4.50 UK Delivery or free UK delivery if order is over £35
(click here for international delivery rates)

For many years the world's finest aerobatic team, the RAF's Red Arrows, have thrilled millions with their demonstrations of this fine aircrafts agility and manoeuvrability. Black Hawks can also be seen in the valleys of Wales, flying ground-hugging flight paths along the valleys. These are the aircraft used to teach flying perfection to new generations of fighter and ground-attack pilots. The aircraft has earned millions of pounds, being exported to many overseas countries.This book contains the world famous colour profiles created by Dave Windle of the type in different operational modes, configurations and colour schemes. Martin Bowman has written detailed descriptions and photographs to create the perfect enthusiasts reference.

It includes a Visual Guide through Profiles.

A useful and interesting book for Aircraft Modelers.

This book covers the British Aerospace Hawk from its early days to the present time. The colour section shows a more colourful variety of special markings up to the present day when the trainers can be decorated for occasions in the history of the type or unit.

Each volume is neatly laid out and if pursued as a series should make a useful library of the basic information and photographs for post-war RAF aircraft.