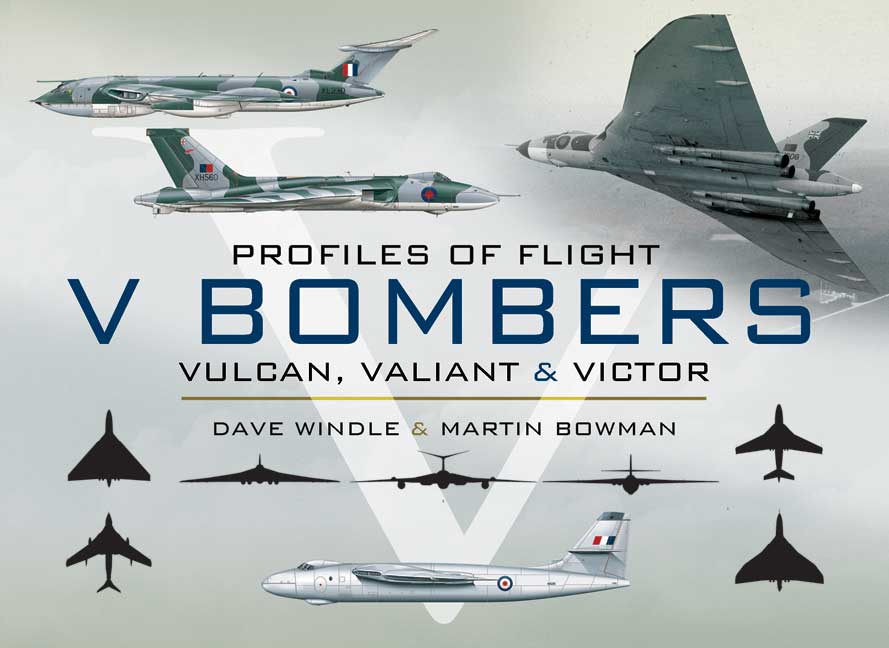 Click here for help on how to download our eBooks
Add to Basket
Add to Wishlist
You'll be £4.99 closer to your next £10.00 credit when you purchase Profiles of Flight: V Bomber. What's this?
Need a currency converter? Check XE.com for live rates

Britain's desire to stay at the leading edge in the design and development of modern jet powered aircraft was born in the later stages of World War Two. The RAF sent requests to the leading aircraft manufactures for a variety of specifications, amongst which was one for a long-range heavy bomber. Three designs were accepted and eventually went into production - these became the V-Bomber Force.

The first to enter service was the Vickers Valliant, a high swept-wing four engine aircraft. This type was used to test-drop Britain's first H-Bomb in the Christmas Islands and then was tasked with delivering our deterrent during the early years of the Cold War. It saw action in a non-nuclear role during the Suez Crisis and then went on to serve as a flight refuelling tanker until withdrawn with metal fatigue problems.

The delta-wing Avro Vulcan then carried our latest nuclear weapon until the Royal Navy took over the deterrent task with the Polaris submarine fleet. This aircraft entertained rapt audiences at air displays around the world as its powerful engines, later to power Concorde, allowed this large bomber to fly like a fighter. Its most famous and only wartime service came during the Falklands Conflict for which it is now legendary for bombing Port Stanley, having flown thousands of miles with countless air-to-air refuelling link-ups en route.
The crescent-winged Handley Page Victor was the most durable of the trio and continued in service as a tanker into the twenty-first century. In practice it was probably the most successful of the three designs. It flew higher and faster than the Vulcan and Valliant and was remarkably robust - even into old age.

The real standout section of the book is the very back which is crammed with accurate colour profiles drawn by David Windle. Including prototypes, trials aircraft and in-service versions in the majority of the colour schemes worn by the types throughout their careers, these images are truly fascinating.

Well written and illustrated, with a good selection of photos.