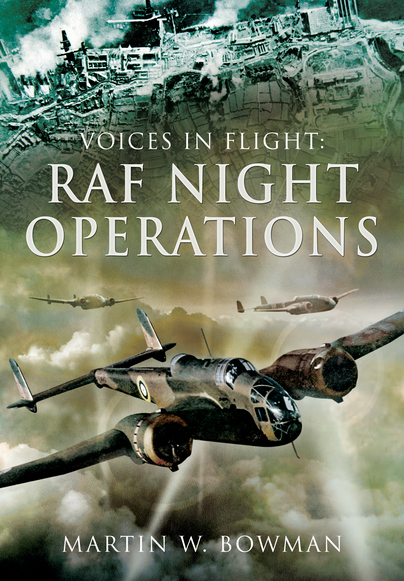 Click here for help on how to download our eBooks
Add to Basket
Add to Wishlist
You'll be £4.99 closer to your next £10.00 credit when you purchase Voices in Flight: RAF Night Operations. What's this?
Need a currency converter? Check XE.com for live rates

'The Navy can lose us the war, but only the Air Force can win it. Therefore our supreme effort must be to gain overwhelming mastery in the air. The Fighters are our salvation but the Bombers alone provide the means of victory...'

So said Prime Minister Winston Churchill to the War Cabinet on the first anniversary of the outbreak of war. But when Britain declared war on Germany in September 1939 her bombers were predominantly twin-engined types like the Wellington, Whitley and the Hampden which after suffering carnage during the day were soon switched to night operations.

Wartime speeches alone cannot begin to describe the misery and fortitude, desperation and terror endured by the civilian population during the 'Blitz Nights' in Coventry, the London docklands and the East End as night after night bombs and incendiaries rained down on them. Their personal experiences and those of war correspondents like James Negley Farson are as vivid, poignant and descriptive as those of the bomber crews carrying the war to the enemy in the early night bomber offensive. These too are mostly recounted at first hand, sometimes in BBC broadcasts to the nation; and they include 'The Unanswerable Double'; 'Winged Words'; 'German Defences'; 'Getting Frightened'; 'Jump For It!'; 'The Night The Fuel Ran Out'; 'Flames, Flares and Fires'; 'Busted Flush'; 'The Tail Gunner's Story' and 'Hampden and 'Wimpy' Ops'. They tell just what it was like to fly in a heavy bomber over occupied Europe.

There are many books written about the bomber night raids of the RAF but this book puts the crews that manned them in a spotlight that shows their fears and at the same time their perseverance knowing that death was a nearly certainty.

A good background to the hardware of Bomber Command for the period.

Written by the prolific military author, Martin Bowman, this is one of a series he is producing entitled ‘Voices in Flight’. It comprises eleven chapters, all of which are stand-alone stories based around the subject area, in this case Night Operations. Each story is provided by a contributor, or from archives, and relates to their experiences of a particular operation or event during the Second World War.

The book reads well, and as it is based upon personal accounts, it contains the contributor’s views and anecdotes. It is not a history of R.A.F. night operations, but it does not pretend to be that, it is a collection of interesting stories around the subject area. As such, I enjoyed reading it, as it is a book you can pick up and put down, because each chapter is self-contained.