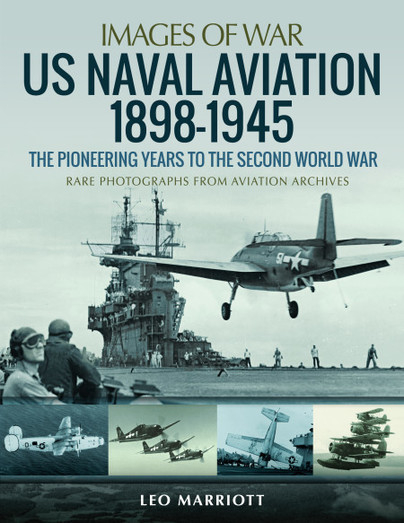 Click here for help on how to download our eBooks
Add to Basket
Add to Wishlist
You'll be £4.99 closer to your next £10.00 credit when you purchase US Naval Aviation 1898–1945. What's this?
Need a currency converter? Check XE.com for live rates

Another volume in this publisher’s “Images of War” series, this book tells its story mainly by means of extensively captioned photographs, the narrative being limited to a short introduction to each chapter. The numerous photographs are, in the main, reproduced sharply and as large as the page size will allow. The cover describes these as being “Rare Photographs from Naval Archives” and, as such, the majority were new to the reviewer.
The chapters are arranged in more or less chronological order and include such topics as “Pioneers”; “Aircraft Carriers”; “Airships and Flying Boats” as well as the various theatres of war in which the US navy operated.
The author, a former air traffic controller and active private pilot, has written numerous books on aviation, covering a wide range of topics and in this book he traces the history of US naval aviation from its tentative beginnings to the important battles at The Coral Sea and at Midway.
The book is well produced, value, and offers excellent value for money and is recommended to any member with an interest in US naval aviation.

This latest book in the Images of War series from Pen & Sword gives us a fantastic photographic overview of US Naval Aviation, right from it's start in 1898 to the end of the Second World War. Most pages have just one photo with an extensive caption, which allows the images to be reproduced at a nice size. There is even a chapter on the airship's aircraft carriers Akron and Macon and their little Sparrowhawk biplane fighters, which were air launched via a trapeze (I must get hold of the reissued Williams Brothers kit of this aircraft). This is followed by the main subjects of this title as just over half of the book is dedicated to the Second World War in all theatres where the US Navy operated.
The images in this book, many of which are published for the first time will be invaluable to modellers, showing as they supply details of the aircraft on their carriers, and many show the extensive weathering seen on naval aircraft thanks to their exposure to harsher elements than their land-based equivalents. I was surprised to see just how crowded some of the carrier decks were, and I am sure better modellers than I could create some fantastic dioramas based on the photographs supplied in this new title. As ever, this series and this title are recommended for your home reference library.