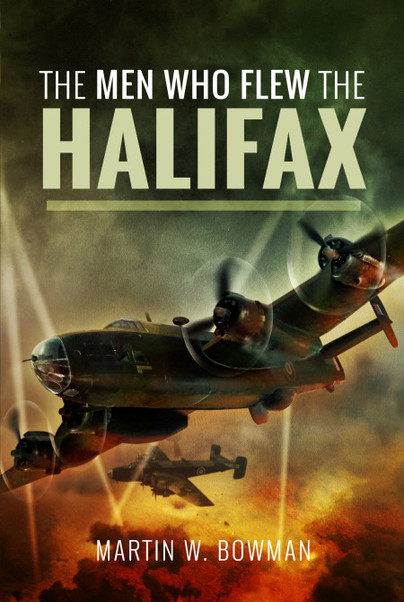 The Men Who Flew the Halifax (Hardback)

Add to Basket
Add to Wishlist
You'll be £25.00 closer to your next £10.00 credit when you purchase The Men Who Flew the Halifax. What's this?
+£4.50 UK Delivery or free UK delivery if order is over £35
(click here for international delivery rates)

This is the story of the air war over Western Europe, much of it told by the Halifax pilots and air crew who took part. It spans the period between 1942 and 1945 and covers the encounters between the Luftwaffe and the air forces of Britain and the Commonwealth.

Many unique experiences are recounted concerning the daily bombing raids that were hurled against Hitler's war machine. The author has sought the experiences of RAF and German fighter pilots, who explain how they stalked their prey before pouncing to catastrophic effect.

This book contains vivid accounts of some of the most heroic actions in the history of air warfare.

This was an excellent book to read indeed, written by one of the leading authorities on this subject and Bowman has a long list of titles to his credit. I personally think Bowman always gets to the heart of the matter with his writing and the reader always feels gripped by the excitement and drama of the story written in the book. I would say the only downside was that I would have liked to have learnt a bit more about the Halifax Bomber itself, I mean I know the basics but a bit more would have helped a lot. There is a fantastic array of photos and pictures throughout the book which are excellent and help tell the story of the men involved. An excellent book I was recommend to anyone who is looking for a good read.

Another nicely crafted book from a leading aviation historian and author, this time covering the Halifax crews. The Handley Page Halifax was one of three RAF heavy bombers to enter service in the air war over Europe. – Very Highly Recommended.

Another insightful book by this wonderful author.

It is a comprehensive look at bombing missions from a plane that was over shadowed by the Lancaster.

It gives a personal look at bomber offensives and is a must for anyone who wants to see the unsung pilots tell their own story.

I had an Airfix 1/72nd plastic model of the Halifax, and it was one of my favourites. The front cover of this amazing history is inspiring and reminiscent of the comic strip stories in Lion and Tiger that were my staple reading diet throughout the 1950s and 1960s. A brilliant story of courage and bravery.