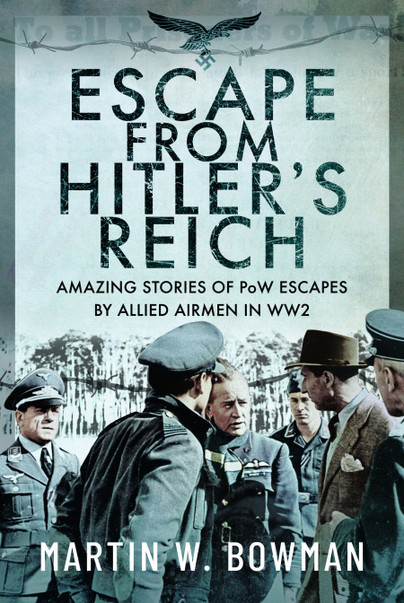 Amazing Stories of PoW Escapes by Allied Airmen in WW2

Preorder
Add to Wishlist
You'll be £20.00 closer to your next £10.00 credit when you purchase Escape From Hitler's Reich. What's this?
+£4.50 UK Delivery or free UK delivery if order is over £35
(click here for international delivery rates)

From 1942 until the end of the war in Europe, the aircraft of RAF Bomber Command and the United States’ 8th and 15th Air Forces maintained a twenty-four hour, ‘round-the-clock’ bombing offensive against the Third Reich. However, aircraft and crew casualties were heavy as bomber after bomber succumbed to the Germans’ flak and fighter defences.

For those not killed outright by the onslaught, only baling out – almost inevitably over hostile enemy territory – could offer a hope of survival. For those faced with such sudden leaps into the dangerous unknown over Germany and Occupied Europe, a few were able to evade capture. For the rest, and particularly the injured, capture was immediate and imprisonment inevitable. Once incarcerated in one of Hitler’s infamous prisoner of war camps, escape became a constant preoccupation for many. The ultimate aim of these men was to complete a ‘Home Run’ – to escape the Third Reich and reach the safety of Britain or other safe Allied territory.

In this revealing narrative, the renowned aviation historian Martin Bowman draws on many first-hand accounts, some never told before, to describe the furious air battles that led to the capture of many shot-down airmen, as well as the subsequent personal campaigns they fought to regain their freedom.

Fascinating for its gripping and factual re-creation of the bomber-fighter/flak encounters, the confrontations in captivity between PoWs and Stalag guards, Escape from Hitler’s Reich provides a real insight into the war as those who ‘fell from formation’ saw it.

Opened in March 1942 to house captured Allied airmen, particularly officers, Stammlager Luft III at Sagan was built to make escape particularly difficult, especially tunnelling. This did not stop the prisoners who dug through more than 100 yards of loose sand, enabling seventy-six men to escape. All but three of the men were recaptured, however, and fifty were executed by the Germans. This Official History of the camp was prepared for the War Office but was never released to the general public. It explains the German administration and running of the camp, the food and conditions the prisoners…

Click here to buy both titles for £45.00
More titles by Martin W Bowman