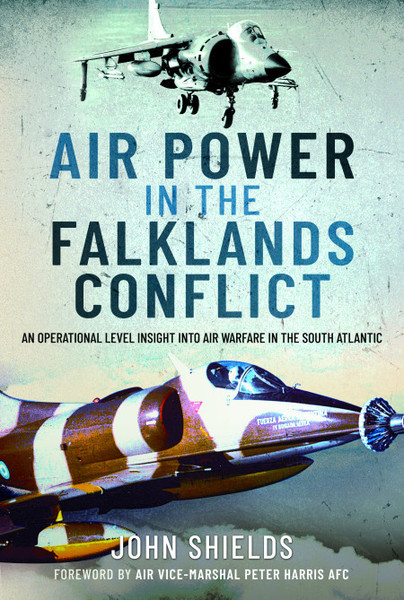 Interview with the Author

You'll be £4.99 closer to your next £10.00 credit when you purchase Air Power in the Falklands Conflict. What's this?
Need a currency converter? Check XE.com for live rates

"This is a fascinating work. Historians of the conflict have much reason to thank John Shields for his research."

"Thought-provoking, and a cracking read."

"In many ways it is a useful reference book, helping to piece in gaps in knowledge, an especially practical device if you are considering creating a model archive of aircraft used in this arena. If the events of spring 1982 are a lasting draw then this book is a must for your reference library."

"The book does offer a view of fighter and strike missions that differs from earlier works on the subject. I found it to be an interesting read and believe that others will do so too."

A scholarly and very detailed analysis of the air war in the Falklands. Deeply analyzes the causes and events surrounding nearly every air combat in the war between the Britain and Argentina. Breaks new ground by countering common perceptions in the air combat effectiveness of the Harrier jump jet.

There is a lot of detail in the book, and the work effort the author has put into this is evident. Much use has been made of records made public now, long after the war, though as is mentioned, there are still some records that remain sealed, so maybe there are some things which may yet put a different slant on some of the conclusions that have been drawn. Overall though, this is certainly the most detailed look at the Falklands Air War I have read to date, and it is also well worth looking through the detailed endnotes as there is a good deal of additional information held in those.

The level of detail provided for anyone trying to piece the conflict together from fragmented popular histories is exceptional. This book could be considered to be essential reading for anyone seeking a balanced view of the air war, and is highly recommended.

Much has been written about this conflict in 1982 in the South Atlantic but until now there has been little detailed analysis of the operational level of the air war. The author attempts to put this right and to extract lessons from that period that still have relevance today. In order to produce a complete picture he has drawn on two and a half years spent in the Falklands as an RAF air defence navigator, plus recently released primary source material from both the British and Argentine sides of the conflict. Its not all pleasant reading for mistakes were made and public relations propaganda obscured facts. Notably the author claims that the Sea Harrier attacks on Stanley Airport were an error, and far more damage to the invasion forces was done by the Vulcan bombing raid, which at least provided a strategic shock to the enemy, as well as creating holes in the airport runway and holding up the delivery of vital supplies and equipment-albeit for a very short time. There’s much more, but you’ll need to buy the book!

The book provided an opportunity to reconsider aspects of the way the conflict was fought. It will be unusual for any reader interested in the Falklands War or military history more generally not to find this book a stimulating and thought provoking read.

A book having its edifice on research that is meticulous, and penned by an expert on the subject, "Air Power in the Falklands Conflict" makes for some absolutely rousing and revealing read. At the crux of the book is an informed and educated "dissection" of the centres of gravity employed by both the British Forces and their Argentinian counterparts in the short but infamous Falklands War. When the Argentinian military invaded the Falklands in 1982, then Prime Minister of Britain Margaret Thatcher had no choice but to declare aggression against the invaders. The fear of huge casualties and unfortunate outcomes weighed heavily on her mind. However she braved all odds and sent her troops in.

Shield's book focuses on the three centres of gravity that the UK relied on in the combat. Shifting between air power, aircraft carriers and the land forces, The author provides a classic dissertation on the craft of war and in the process rebuts a great many pieces of 'received wisdom'.

An interesting book which looked at the Falklands war from a statistical frame to determine if the current perceptions of the war were valid. A good history read.

Air Power in the Falklands Conflict is a fascinating and informative read. It delves deep into the actual operations side of the air conflict and not how it was hyped up by the media.
There are multiple tables and charts depicting the sorties flown, and the weapons deployed. Plus, there are all the stories related to the engagements and much more.
At the tail-end of the book is a huge list of resources used, including essays in books and dissertations. There is also a list of online material and official publications that were used... Air Power in the Falklands Conflict is an excellent reference tool.