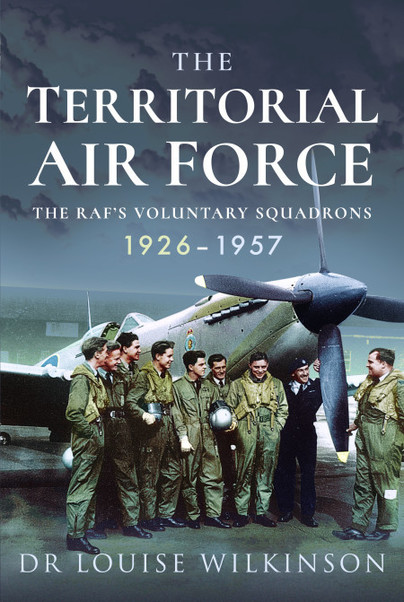 Click here for help on how to download our eBooks
Add to Basket
Add to Wishlist
You'll be £4.99 closer to your next £10.00 credit when you purchase The Territorial Air Force. What's this?
Need a currency converter? Check XE.com for live rates

To date, little has been written about the Territorial Air Force as a voluntary military organisation and no sustained analysis of its recruitment and social composition undertaken. Made up of three different parts, the Auxiliary Air Force, the Special Reserve and the Royal Air Force Volunteer Reserve, these three separate and different groups have not featured significantly in existing literature.

Current historiography of the AAF and SR is dominated by the experiences of Nos. 600 and 601 Squadrons, which were based in London, and presents a popular image of a gentlemen’s flying club, whilst that of the RAFVR presents an image of a much more egalitarian institution, intended to be a citizens’ air force.

This book will present the history of the Territorial Air Force from its creation in the early 1920s until 1957. It will consider the ideas behind the formation of two different types of reserve for the RAF and it will examine the way in which men were recruited for the three different groups.

Woven throughout the text will be an analysis of how the volunteers joined, and what kinds of men were accepted into the organisations as both pilots and officers. It will also analyse the influences class and social status had on recruitment in the run up to the Second World War. It will explore the key differences between the Auxiliary squadrons and the SR squadrons, as well as the main reasons for the idea of merging the SR squadrons into the AAF squadrons. It will briefly discuss the newly formed University Air Squadrons which were set up to promote “air mindedness” and to stimulate an interest and research on matters aeronautical.

Military voluntarism continued to play a key role in the defence of twentieth-century Britain, but the underlying tensions and weaknesses associated with a class-based voluntary culture meant that the TAF had to change in response to new pressures. Class ceased to be the key determining factor in the recruitment of officers as the organisations faced new challenges. Within both the AAF and the RAFVR the pre-war impression of a gentlemen’s flying club finally gave way to a more meritocratic culture in the post-war world.

The amount of detail contained in the book is amazing and there can be no more complete record of the voluntary squadrons that made up the Territorial Air Force.

I take my hat off to Louise Wilkinson who has thoroughly researched the Territorial Air Force between 1926 and 1957 and written what is almost certainly the definitive account of the Auxiliary Air Force, the Special Reserve and the Royal Air Force Volunteer Reserve.

The narrattive is informtive and never dull and there are extensive appendices which deal with everything from recruitment posters to potted biographioes of officers. There is an extensive biobliography, notes' section and index. What more could you want?

The Journal of The Orders and Medals Research Society Journal

... the book does contain the fruits of most welcome and detailed research. It is an important contribution to RAF historical literature.

The book has two main elements to it namely, the history of the TAF and the types of men who served in it. The author has done extensive research into both aspects and she has produced an excellent volume. There are certainly many facts she has found that will surprise the reader and needs congratulating for her efforts.

Louise Wilkinson was born in Malta in 1961 where her father was serving during his National Service. She joined the Women’s Royal Army Corps as a Data Telegraphist in 1979, remaining until 1982. Having then worked in local government, Louise gained a degree in Humanities in 1992, followed by a Post Graduate Certificate in Education. She took a post as history teacher at Grangefield School in Stockton on Tees, eventually becoming head of history. After retirement in 2011, she was awarded her PhD in 2017, this book being the culmination of her research and writing.