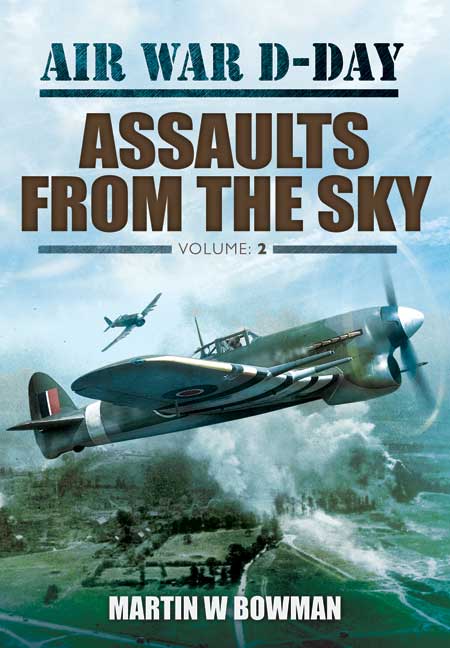 Add to Basket
Add to Wishlist
You'll be £19.99 closer to your next £10.00 credit when you purchase Air War D-Day: Assaults from the Sky. What's this?
+£4.50 UK Delivery or free UK delivery if order is over £35
(click here for international delivery rates)

This is the second volume of a comprehensive five part work on D-Day that includes a multitude of personal military accounts from both Allied and German Aviation personnel 'who were there'. Overlord began with an assault by more than 23,000 airborne troops, 15,500 of them American, behind enemy lines to soften up the German troops and to secure key objectives. 6,600 paratroopers of the US 101st 'Screaming Eagles' Division in 633 C-47s and 83 gliders and 6,396 paratroopers of the US 82nd 'All American' Division in 1,101 C-47s and 427 gliders were dropped over the neck of the Cotentin peninsula.

By the end of the operation, the list of casualties was extensive. But 101st Airborne Division linked up with the US 4th Infantry Division beach landings at Pouppeville, the most southerly exit off 'Utah' Beach and the 82nd secured the area north of Ste-Mère-Église after fierce fighting and drove the enemy north, considerably delaying the German 243rd Infantry Division from contacting the Allied beach assault force. This important episode within the wider history of D-Day is enlivened in classic Bowman fashion, featuring both extensive historical notes as well as deeply personal accounts of endurance and individual gallantry.

A part of the Air War D-Day series, Assaults from the Sky focuses on the airborne operations carried out in Normandy by the 6th British, and particularly the 82nd and 101st US Airborne Divisions. Almost entirely composed of a very wide range of veterans accounts, including aircrews as well as paratroopers and glider troops, they each present a most vibrant recollection of events, beginning with their take-off and flight across the English Channel, and ending with their arrival on the drop zones and the first phases of the various actions which were carried out on the ground. Although their story has been told many times before, the sheer quantity of material in this book will nevertheless interest anyone who has a passion for the Airborne Forces.