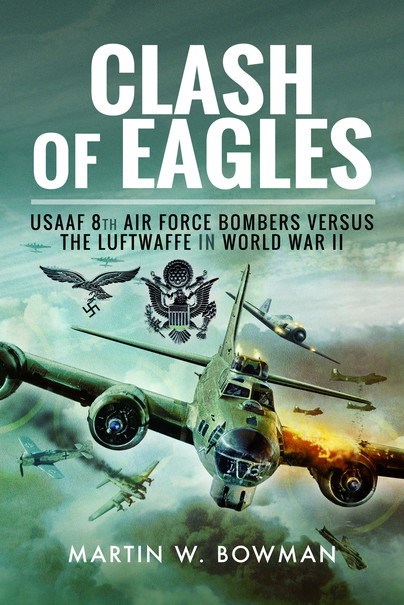 Add to Basket
You'll be £14.99 closer to your next £10.00 credit when you purchase Clash of Eagles. What's this?
+£4.50 UK Delivery or free UK delivery if order is over £35
(click here for international delivery rates)

This is the story of the air war over Western Europe, told first-hand by the American and German pilots and aircrew who took part. It spans the period between 1942 and 1945 and covers the encounters between the audacious Luftwaffe fighter pilots and the Fortress and Liberator bomber crews of the American 8th Air Forces flying from East Anglia.

Many unique experiences are recounted from both the night and day bombing raids that were hurled against Hitler's war machine. What was it like to fly through the dense flak over the Ruhr and against the German Experten and to be hit by machine gun and cannon fire from Focke Wulf 190s and Bf 109s? How did so many badly damaged bombers manage to struggle back, against all odds, to their East Anglian bases?

The author has sought the experiences of German fighter pilots, who explain how they stalked their prey in the skies over the Reich and how they pounced on their four engine victims from high. This book contains vivid accounts of some of the most heroic actions in the history of air warfare and features many action photographs.

I have been looking for a book that shows what the mighty 8th went through over Europe and this did not disappoint.

We see the horrors of being a bomber pilot having to fly over flak and be on the look out for enemy fighters and this is what makes the book so enthralling to read.

Buy this book and you will find that you have a real engaging page Turner on your hands.

As this detailed history looks at both sides of the adversaries it makes this one I'd consider a must-read for anyone interested in the US day bombing offensive of WW2.

The author is a leading aviation historian covering the air war of WWII. This is a softback edition of a book first published in hardback in 2006. It is one of the best accounts of its subject – Very Highly Recommended.