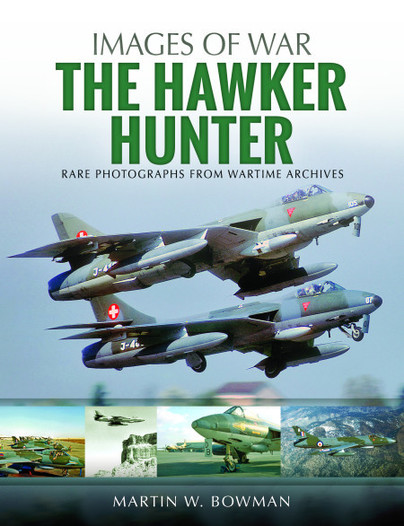 Add to Basket
Add to Wishlist
You'll be £14.99 closer to your next £10.00 credit when you purchase The Hawker Hunter. What's this?
+£4.50 UK Delivery or free UK delivery if order is over £40
(click here for international delivery rates)

If ever there was a real pilot's aeroplane it was the Hunter; an outstanding multi-purpose aircraft which excelled in the roles of interceptor fighter, ground attack, reconnaissance, research vehicle and two-seater trainer, not forgetting its dramatic formation aerobatic performances.

The Hunter is one of the world's greatest aircraft. For three decades, pilots have enthused about it, extolling the virtues of its smooth, aerodynamic lines, 4 x 30mm cannon, the Rolls-Royce Avon engine, and its outstandingly honest handling characteristics combined with a lively performance. It saw operational deployment in Europe with Fighter Command and 2nd TAF, in Cyprus, the Middle East and the Far East, operating in the ground-attack role against rebels in Aden and Malaysia respectively. The Hunter was a classic thoroughbred of its time, from the stables of one of the finest fighter manufacturers in the world and, for fifty years, its adaptability was rarely challenged.

Although the last example was retired in July 2001, the Hunter legend undoubtedly lives on, with 114 potentially airworthy airframes located in fourteen countries around the world. Here, the legendary tale of the Hunter is told in words and images.

"Fans of British Cold War military aviation will certainly find this book to be a must-have read. Strap yourself into the cockpit of a Hawker Hunter and take a flight through the early years of military jet-fighter history. You won’t be disappointed."

Another interesting volume that engies the ranks of the Images of War Series.

A welcome addition to a very popular series by a leading aviation historian. The Hawker Hunter was not only one of the most elegant jet fighters ever built, but a significant export success – Very Highly Recommended

Martin Bowman's marvellous book about one of the greatest fighter aircraft of all time, and built by a company for whom I spent most of my life working! Brilliant.

A marvellous collection of images, coupled with some very informative text from one of our best aviation authors. Super new book, easy to recommend.

The book, written by Martin W. Bowman, an authority on aviation history, is an extremely valuable starting point for learning about an aircraft that has been the pride of the British aerospace industry for many years.

Many modellers are on a tight budget and spend hours online looking for that right reference, well this book brings it to you in one place and has a lot more interest to it to boot.

Without question, the much lamented Hawker Hunter was one of the stars of the Royal Air Force’s (RAF) Cold War line up. A casual sift through autobiographical and historiographical works contrive to paint a picture of an aircraft which was universally loved by all who either flew or worked upon it. Whilst enthusiasts of other aircraft types will probably make justifiably similar claims; it is the Hunter, ‘The Queen of the Skies’ which punctuates the majority of Cold War stories, leading as it did, to exotica such as the Buccaneer; Lightning and, in a convoluted way – the Harrier.

This book aims to provide a pictorial review of the aircraft from its inception through to its withdrawal from RAF service. After an initial overview of the history; design and construction of the Hunter, the Author moves onto the introduction and evolution of the type in frontline RAF service. Despite the Hunter’s initial shortcomings, (notably range and engine surging), the type quickly evolved into a record-breaking and versatile aircraft which saw active service in notable campaigns such as Brunei; Aden, Malaya, and the Suez Crisis to name but a few.

The Hunter enjoyed a rich and varied career before eventually being displaced from frontline duties. The Author deals with the transition from Interceptor to Ground Attack and the broad operational history of the Hunter deftly, and with sympathy. The Author’s writing style pre-supposes no prior knowledge although to fans of the Hunter, most of the terrain will be familiar. That being said, the period photographs from long – lost Middle Eastern and European spheres of RAF operations which accompany the review are deeply nostalgic; emotive, and entirely welcome!

One area where this book excels over other offerings is that of its comprehensive review of overseas operators and their application of the type. The featured air arms range from familiar Western European NATO allies through to the lucrative Middle Eastern and former Commonwealth export markets. In many ways, this chapter is pivotal as it documents the ‘last hurrah’ for the Hunter, demoted as it had been to secondary duties and scheduled for replacement by the RAF by this time. It was here, in the crucible of the Cold War proxy and wars of liberation that the Hunter obtained a new lease of life in the former colonial and commonwealth countries. The treatment given to the overseas operators of the Hunter is genuinely engaging and thought-provoking, particularly when consideration is given to the strong demand for refurbished examples and the relative success of the Hunter as a UK military export.

In summary, this informative and highly-readable book is recommended for anyone with an interest in the Hunter and/or its historical theatres of operation The Author writes with a genuine enthusiasm for the subject matter at hand, and in many ways, the work could be considered a salute to the aircraft and those who operated it. The style and substance follows in the established tradition of other Images of War aviation titles combining high quality archival photographs alongside detailed captions and concise chapters.