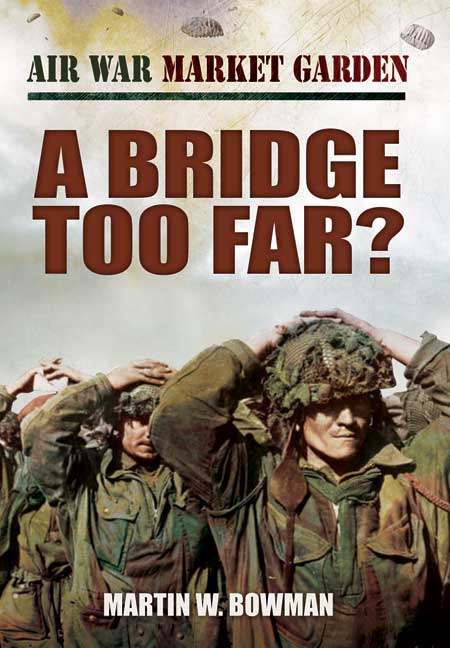 Add to Basket
Add to Wishlist
You'll be £19.99 closer to your next £10.00 credit when you purchase Air War Market Garden: A Bridge Too Far. What's this?
+£4.50 UK Delivery or free UK delivery if order is over £40
(click here for international delivery rates)

This, the fourth and final volume of the series on Market-Garden in September 1944 reveals the final fate of the troops at Oosterbeek and the decision to evacuate all able bodied men in Operation 'Berlin' as well as the subsequent Operation 'Pegasus' when the Allies tried to return as many beleaguered troops back to Allied lines as possible. Was Arnhem indeed 'a bridge Too Far'? While 'Market-Garden' certainly was a heroic failure conducted at great cost it is debatable whether it contributed materially to the ultimate victory or was a foolish sacrifice of thousands of troops, aircrew and Dutch civilians in an ill-conceived assault on the German-held bridges across the Lower Rhine.

There is no doubting the gritty, gallant and valorous contribution on the part of the British, Dominion, American and Polish paratroopers, the RAF and USAAF aircrews and their German opponents and Dutch civilians. Their incredible, illuminating and often under-stated accounts of extraordinary courage, camaraderie, shared terror and encounters with the enemy offer a more personalised view of 'Market-Garden' through the words of those who were there at the heart of the action. These tales are complemented by the author's background information supplemented by the inclusion of daily timelines that give an overall picture of each battle and air operation.

This final chapter in Martin Bowman's four-part account of Operation Market Garden examines the last days of the Battle of Arnhem, particularly the events leading up to the 1st Airborne Division's withdrawal, and the incredible story of Operation Pegasus; the sheltering, organisation and later extraction of over 100 escapees who were cut-off on the other side of the Rhine for a further month. He concludes with an analysis of the innumerable factors which contributed to the Allied downfall, including several ideas which have not been widely considered. In view of the vast library which has been published about Market Garden, and above all the Arnhem episode, it is very difficult to add anything new to this very familiar story. Yet by using four books to describe what all before him have attempted to compress into one, Bowman has produced an exceptionally detailed and very readable account, taking every opportunity to describe events in the words of those who experienced them.

The template of previous volumes holds good, plenty of contemporary narrative, sufficient maps and a good complement of photographs. Worth buying.

The author has done a tremendous job in this series; Air War Market Garden gives the reader the best accounts to date of the ferocious battle that took place in the air, and on the ground, against overwhelming German odds.

A comprehensive insight into the aerial exploits at Operation 'Market Garden' in September 1944.