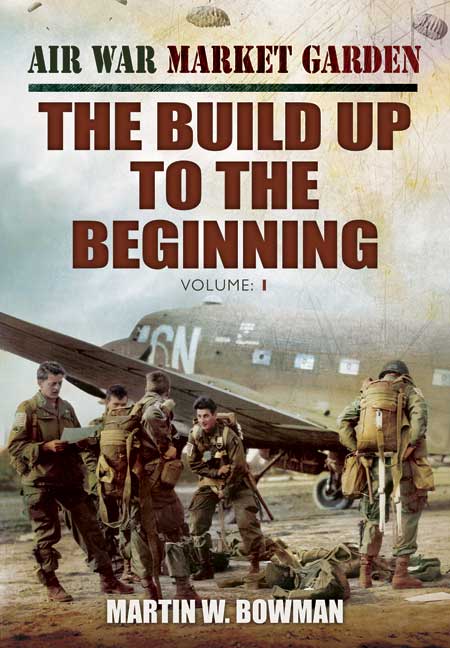 Air War Market Garden: The Build Up to the Beginning (ePub)

Click here for help on how to download our eBooks
Add to Basket
Add to Wishlist
You'll be £4.99 closer to your next £10.00 credit when you purchase Air War Market Garden: The Build Up to the Beginning. What's this?
Need a currency converter? Check XE.com for live rates

This is the first volume of a most impressive tribute and accurate four part work that uniquely presents a complete account of the air operations during 'Market-Garden' in September 1944 when British, US and Polish airborne troops made a gallant attempt to seize and hold bridges across the Lower Rhine in Holland as a springboard for crossing into Germany. 'Market', the airborne part of the operation, was at the time the largest in history. In this unprecedented and insightful account, the exploits of the First Allied Airborne Army are relayed in full detail. Supplemented with historical notes regarding the ground operations, this is sure to offer an unparalleled account of the events as they unfolded in the skies above Holland.

If successful, the war could be over by Christmas. Lulled into a false sense of security, many people were of the opinion; 'What could go wrong?' That it did and on such a massive scale is the underlying theme throughout this series. The action was at times very confused, so a narrative of events contained in sixteen timelines at intervals throughout this series cuts through the fog of battle to explain the situation from its overoptimistic beginning to the tragic conclusion. This volume utilises first hand personal accounts as well as a wealth of factual data to create a real sense of the times at hand, setting an impressive benchmark for the rest of the series.

This first book of Martin Bowman's four-part epic about Operation Market Garden describes the planning and preparation of what was the largest airborne operation in history, through to the first 24 hours of the landings at Arnhem. These are the most crucial phases of any book attempting to understand the Battle, as it was in the plan that all of the mistakes were made which condemned the operation to failure before it had started. It is a subject which has been wrestled with many times before to the point where it is quite impossible to add anything that is particularly new, but Bowman uses the immense space that a four-part series provides to describe it in a level of detail which none have done before, drawing on a vast range of first hand accounts to provide a thorough and extremely readable account which is largely told in the words of those who were there.

The book covers the fighting at the Arnhem by the Allied airborne units involved, and it does so very thoroughly. Like other histories by this very well-informed writer, the text consists of personal experiences as well as much factual background material in the form of 'timelines', orders of battle and diary extracts. There are also several maps, which help the reader follow the often confusing developments on the ground. Martin Bowman offers a well-crafted and very readable addition to the literature. Highly recommended.'

What is published here as Part 1 must be regarded as a pure history book with 3 other parts still to follow in the future and this Part 1 only gives the story of the preparations and the first part ‘Market’ of this operation: dropping of paratroopers and the landing of fully equipped assault gliders followed by the occupation of the bridges at and around Arnhem until released by advancing ground troops. With a swift occupation of the bridges it was hoped Allied ground forces could invade deep into Germany and end the war in just a couple of weeks.

This book is well written and gives an excellent account how things went from bad to worse and later to disaster with the costs of many lives on the Allied side.

This is a pure READING book without too many fancy colour maps, colour drawings of the weapons and aircraft used and without the many hundreds of photos on glossy paper at A4 size. In fact there are only two sections of photographs with a total number of 57 only but at least the images selected give a very good account of persons, locations and material used.

The book it is well worth to be read since it gives much deeper insight than ‘A bridge too far’!