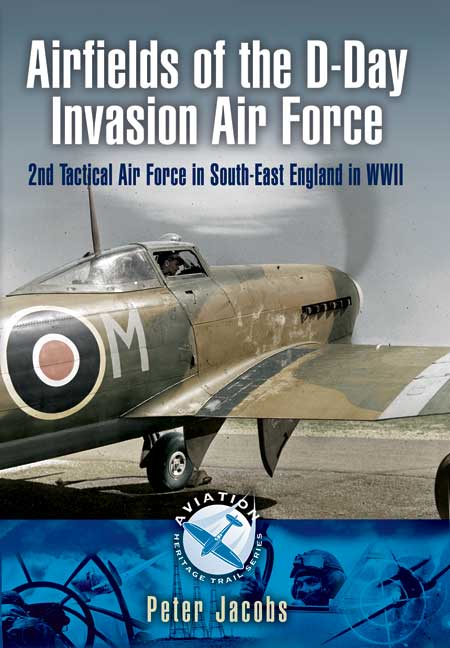 Add to Basket
Add to Wishlist
You'll be £12.99 closer to your next £10.00 credit when you purchase Airfields of the D-Day Invasion Air Force. What's this?
+£4.50 UK Delivery or free UK delivery if order is over £35
(click here for international delivery rates)

As part of the Aviation Heritage Trail series, the airfields and interest in this book are concentrated in a particular area - in this case Kent, Surrey, East Sussex, Essex and Greater London.

The South east of England emerged from six years of war with a rich diversity of RAF bomber and fighter airfields used by the 2nd Tactical Air Force, both before and after the D-Day landings. Much of this proud legacy is now threatening to disappear. However, the tourist can combine visits to an abundance of disused and active airfields, country houses and museums with countless attractions, imaginative locations and broadland and coastal hideaways that have no equal.

As featured on Scoop It!

As featured on Flyin' and Ridin'

A book for researchers, tourists and history buffs alike !
For most people when we say 'D-Day', the pictures of the French beaches, smoke, men running through waves, landing craft and bunkers come to mind. The actual landings. But BEFORE that morning of the 6th of June a LOT of preparations were needed and these started well over a year ahead.

One of the things needed to make it a success, was air superiority. And once that was achieved, the tactical use of aircraft, i.e. supporting the troops on the ground, was paramount. That meant many aircraft overhead, long before the actual landings took place, just to take the German Luftwaffe out of the game. But also to bomb any fortress, bunker and machine gun nest known that could interfere with the landing troops.

For this the Allies needed many airfields, in England, from which the air forces could reach France. This book by Peter Jacobs is about those, mostly temporary, airfields in the South-East of England, used by the special 2nd Air Force !

The book starts with a really interesting overview of how 2nd Tactical Air force came to be, who its leaders were and how it developed. Chapter 2 is about D-Day itself and the effects of the 2nd TAF's operations in particular. An interesting read too.

From Chapter 3 onwards Peter Jacobs starts telling about the specific airfields. In alphabetical order within geographical chapters. Chapter 3 is called 'Airfields of Essex, Hertfordshire and East Anglia and covers 5 airfields. From here on Peter describes each airfield in detail, its history, where it was and what is left today (if anything), the operations that took place and the units that used it. Every chapter has many photos, from yesteryear AND of the current situation on many of these (former) fields.

This was a great read and a wonderful 'look-up' book when researching or visiting England !

'An excellent read featuring 26 airfields, most of which have not been featured on the control towers website making this book very welcome...Recommended!'