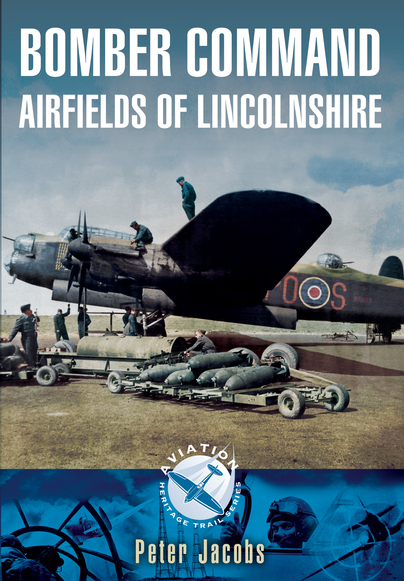 Add to Basket
Add to Wishlist
You'll be £14.99 closer to your next £10.00 credit when you purchase Bomber Command Airfields of Lincolnshire. What's this?
+£4.50 UK Delivery or free UK delivery if order is over £35
(click here for international delivery rates)

From the opening day of the Second World War, RAF Bomber Command took the offensive to the enemy and played a leading role in the liberation of Europe. Many of its squadrons were based in Lincolnshire, where the flat terrain and open fields made the county ideal for the development of new airfields. All of Bomber Command’s major efforts involved the Lincolnshire-based squadrons. The Battles of the Ruhr, Hamburg and Berlin, during the hardest years of 1943/44, were just some of those when night after night hundreds of bombers took off from the county, many never to return. It was also from Lincolnshire that precision raids were mounted against targets such as the diesel engine factory at Augsburg, the notorious Dortmund-Ems Canal, the mighty German battleship Tirpitz, and, of course, the Ruhr Dams.
Most of Lincolnshire’s wartime bomber airfields have long gone, with many having reverted to their pre-war agricultural use. Only Coningsby, Scampton and Waddington remain in service with the RAF today, while others - such as Binbrook, Blyton, Spilsby, Strubby, Swinderby and Woodhall Spa – have long fallen victim to Defence cuts. Other airfields have survived and maintain the link with their flying past. All are included here, some well-known, others less so.
From these airfields came countless acts of personal courage and self-sacrifice, with eight Victoria Crosses, the highest award for gallantry, being awarded to men flying from bomber airfields in Lincolnshire. All are included, as are stories of other personalities who brought these airfields to life. In all, the stories of the county’s twenty-nine wartime airfields of Bomber Command are told, with a brief history of each accompanied by details of how to find them and what remains there today. Whatever your interest, be it aviation history or something more local, there is lots to discover. Lincolnshire has truly earned its name of Bomber County.

An in-depth look at the 29 airfields in Lincolnshire used by RAF Bomber Command during World War Two.

The Aviation Historian, issue no 19

I once spent a family holiday week on the outskirts of Strubby airfield, and one of our afternoon walks took in the airfield itself. Not much to look at now, and I don't remember there being any buildings to photograph; this would have been in the days before digital photography, when you had to make every film shot count because of the enormous expense involved in buying a 36-exposure reel of colour film. I mention this in the context of lapsed East Anglian and Lincolnshire WW2 airfields - there was a heavier concentration of airfields in the East of England than anywhere else because, it was believed, the treat of invasion by Hitler was more likely to come from the North Sea coast than anywhere else. Peter Jacobs's superb book is as comprehensive a look at Lincolnshire airfields as any I've come across in the past twenty years.

'This is just the kind of book I like these days. Not just interesting to read, but a really useful guide if you want to have it with you as you travel around and see some historical sites of WW2 in Britain. During the war one campaign that was undertaken from Britain throughout the war was that of the bombers reaching out to targets in Germany and occupied Europe.'