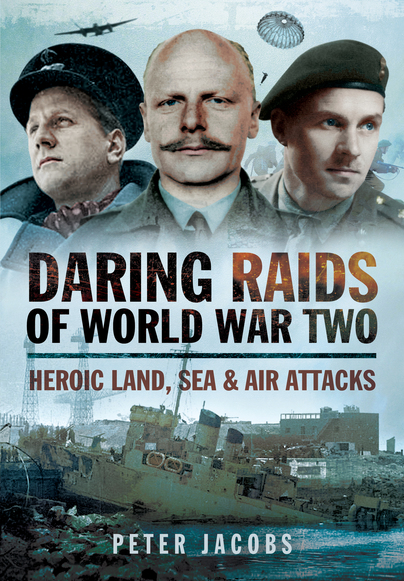 Add to Basket
Add to Wishlist
You'll be £25.00 closer to your next £10.00 credit when you purchase Daring Raids of World War Two: Heroic Land, Sea and Air Attacks. What's this?
+£4.50 UK Delivery or free UK delivery if order is over £35
(click here for international delivery rates)

The Second World War saw a host of heroic raids enacted across the various theatres, all delivered valiantly in a variety of ways by British combatants; on land, by sea and from the air. Daring exploits such as the raid on Rommel, the endeavours of the Cockleshell Heroes and the Dam Busters have become legendary in the annals of warfare. All feature here, alongside details of fascinating lesser-known operations.

It goes without saying that not all the raids were a success; in fact, some went disastrously wrong but the men who carried them out did so with extreme courage and in the knowledge that they might not return. Here, Peter Jacobs tells the gripping stories of some of the most heroic raids of the entire conflict. These include the disastrous landings at Dieppe; the amphibious assault on the dry dock at St Nazaire (more Victoria Crosses were won during this raid than in any other operation of the war); the airborne assaults on the German radar installation at Bruneval and later on Pegasus Bridge as a prelude to D-Day; and the low-level raid by RAF Mosquitos on the prison at Amiens to release members of the French Resistance.

This is an intriguing and insightful historical record of thirty of the most daring and strategic raids of military history and is sure to appeal to all enthusiasts of the genre.

World War Two introduced large numbers of special forces, some traditional raids from the sea, and large scale raids by air. This fascinating book covers a selection of raids to illustrate the new scope for attacks on and behind enemy lines, with the blurring of military operations, intelligence and spying, a great read with some truly inspiring stories.

The individual chapters are well written and well balanced, and the result is an interesting cross section of the smaller scale British operations of the Second World War (with one or two larger scale actions dropped in).

This book describes 30 ‘raids’ carried out by the allied forces during WW2. As the subtitle already indicates ALL forces are included, sea, air and land. As someone else already indicated, each and every operation justifies a book of its own, and most are indeed covered in one or more books already. But to have an overview of all these raids together in one book provides one with a great ‘index’ for further research and reading.

It also shows the many courageous and often imaginative operations that were carried out in these years, often by special elite troops, but also by some unexpected forces like the old Fairey Swordfish bi-planes. Aircraft that looked like they flew straight out of WW1 and were sitting ducks with their 100 mph top speed!

Other interesting stories include the better known units such as the Commandos, SOE or LRDG. Each and every soldier on any of the missions described was a volunteer and a hero, and many were decorated for their tremendous courage and commitment.

Some of my favorite stories include the Raid on St. Nazaire, the Dam Busters, and Pegasus Bridge. Each and every a classic. But some of the lesser known operations such as Bridges at Maastricht, Vaagso and Lake Commacchio are great reads too.

The book spends a limited number of pages on each operation of course, but it provides great insight in all of these special ops. I think the book is especially useful to point you at these stories and make you go dig for more info on the ones that interest you most!

This book describes thirty famous raids undertaken by the British during the Second World War; including the attack on the Italian fleet at Taranto, the sinking of the Bismarck, the raids on Bruneval, Dieppe and St. Nazaire, the Dambusters, Pegasus Bridge, the reconnaissance of the Normandy beaches, the Chindit expeditions, and Operation Market Garden. Each of these subjects are worthy of a book in their own right, and as they are typically described in ten pages or less, obviously much detail has had to be sacrificed. Nevertheless, Peter Jacobs has done a remarkable job of accurately and concisely summarising the important points of these incredible operations, making for an extremely fast and entertaining read, and one which will certainly inspire further reading.