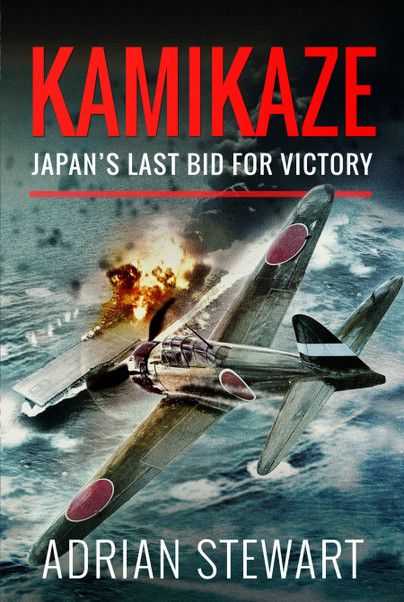 Add to Basket
Add to Wishlist
You'll be £19.99 closer to your next £10.00 credit when you purchase Kamikaze. What's this?
+£4.50 UK Delivery or free UK delivery if order is over £35
(click here for international delivery rates)

In this fascinating book the author examines the Japanese concept of Kamikaze, the deliberate self-sacrifice of life in the cause of victory. This attitude, while incomprehensible to their American and European enemies, has its roots in the samurai tradition of fighting for their master or nation regardless of personal safety.

By late 1944 the Japanese had already proved themselves fanatical but the actions of the Kamikaze Corps of pilots from the Leyte Gulf battle onwards took matters to a new level. Allied forces were shocked to find themselves the subject of widespread deliberate suicide attacks by pilots.

These continued during the invasion of the Philippines in early 1945 and reached a climax during the Battle of Okinawa from 1 April to June 1945. In total over 1000 kamikaze airmen perished.

Graphic description of these suicide attacks and the resulting loss of life and ships litter this revealing and shocking book.

The author’s in depth study of the historic and cultural reasons for this seemingly reckless courage is important and illuminating.

Air warfare and military history enthusiasts will enjoy this account of an important element in Japan’s Pacific War.

In nine chapters, 209 pages, Adrian Stewart takes us from a feudal Japan to the end of World War II. Abhorrent to the West, deemed fanatical, our understanding of the Japanese concept of duty, service and sacrifice are shown in a revealing light that explains this historic Bushido code through its evolution.

Adrian Stewart's book describes a terrifying and incomprehensible mindset that the Japanese thought would give them victory against the USA.

I do find that the available literature (in English) on the Japanese aspect of World War 2 tends to be significantly less than that on the European, North African and Eastern Fronts so this volume is a welcomed addition. It does deal with a very infamous aspect of Japanese military history and it does this superbly well. It draws upon many Japanese military sources and is very well presented. It is highly recommended as a great book to read on these pilots who made history at the cost of their lives – a few thousand of them. Their story needs recounting which is done extremely well by the author and their heroism needs to be placed in context with the then cultural aspects of their nation for which they gave their lives – sold so dearly.