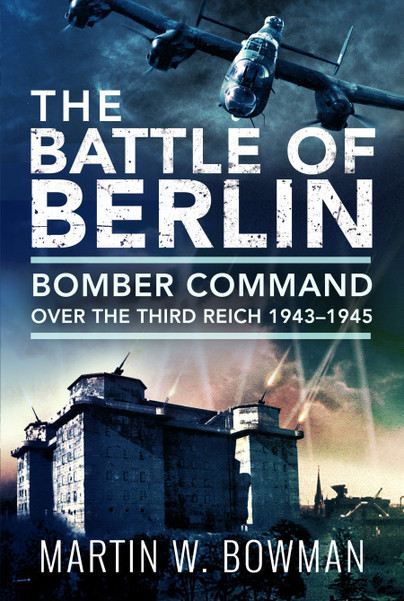 Add to Basket
Add to Wishlist
You'll be £30.00 closer to your next £10.00 credit when you purchase Battle of Berlin. What's this?
+£4.50 UK Delivery or free UK delivery if order is over £35
(click here for international delivery rates)

Bowman is a prolific aviation author and he has produced an atmospheric book packed with detail, covering both sides of the story. He has done a service to researchers, though perhaps there is too much detail for those with merely a passing interest.

This book has been a difficult one to review. It meets its aims and is meticulously researched, something for which the author is noted, The book lists, over 20 Chapters, the course of the campaign, the effect on the aircrews and to a lesser degree, the effect on the occupants of Berlin. It does not make comfortable reading. The author chooses to use anecdotes and personal histories, with personality portraits to tell the story of the campaign, rather than a drier operational analysis style of writing.

It can be read by dipping into chapters, providing a slightly surreal “ripping yarn sense” of the campaign, with ENSA parties and japes in the mess, but is probably best read in long stretches, where the sense of unending repetitive stress builds into a feeling of dread, as crews wonder if they will be the ones not coming back tonight.

The author touches on the controversies of the strategic bombing campaign, but mainly offers the viewpoint of the crews undertaking the bombing. The industrial process nature of the campaign is brought out well, with mention of the damage that the campaign did to German war industries. The question of the effect that the campaign had on diversion of German resources into fighter and antiaircraft defence is also covered.

This book is a fitting tribute to the many bomber crews that fought and died during the campaign and accurately conveys their viewpoint and gives a flavour of their experience.

An impressively informative, deftly written, exceptionally well documented, and expertly organized history, "Battle of Berlin: Bomber Command over the Third Reich, 1943 - 1945" is a seminal work of original scholarship and one that is especially and unreservedly recommended for both community and college/university library World War II European Theatre collections in general, and WWII aerial warfare supplemental studies lists in particular.

Sir Arthur Travis ‘Bomber’ Harris basically ran Bomber Command with a passion, he always believed the best way was to go big against Nazi Germany. The book follows the number and organisation of what turned out to be thousands of bombing raids over Berlin and the surrounding area. Although 40% of the population leaves the city, not as much of the city ended up being destroyed, especially when you consider how much was dropped on it. It turned out Germany had its own Blitz spirit too. This book contains a fascinating look into the aircrews used and the effect on those who had to live through this constant bombing. The research and insights throughout this book are both splendid and exhausting. A definitive book and comprehensive read by an excellent author and historian in Martin Bowman.

As I’ve said previously any book written by Martin Bowman is a fantastic writer and historian, because he really does know his stuff which is why he has huge WWII portfolio of books. The research and writing is second to none, and I would say that this is born out on the back cover from a number of reviews from equally good historians. You learn an awful lot from this book and stuff I hadn’t known about before. I really enjoyed how the author went into so much detail not just about the people but also the daily flights and missions, you learn so much about the personnel it can sometimes be a lot to take in. This is a phenomenal book on the subject, certainly one I’d want on my shelf, this is a definite one to get. I give this a 5 star rating.

This was an interesting book to read, and very informative. I learned a lot from this book. I do recommend it if you want to know more about WWII.

I learned a lot about the RAF bombing missions over occupied Europe. I had not read before of USAF airmen serving aboard RAF planes. Nor had I been aware of the use of 'sky markers' and 'route markers'. I do like the selected cover art. I give this book a 4 out of 5.