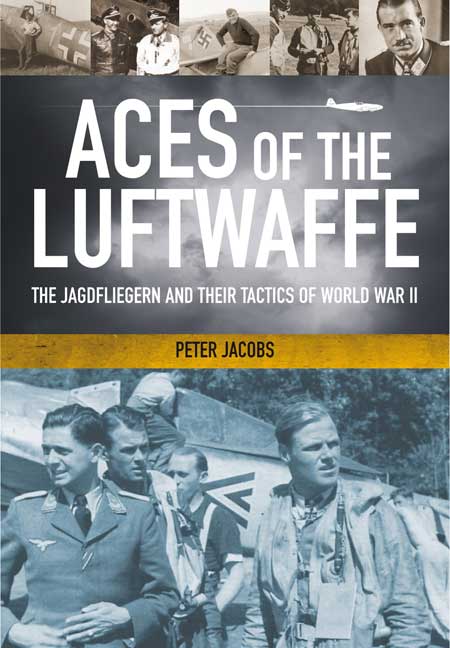 Aces of the Luftwaffe (Hardback)

The Jagdflieger in the Second World War

Add to Basket
Add to Wishlist
You'll be £25.00 closer to your next £10.00 credit when you purchase Aces of the Luftwaffe. What's this?
+£4.50 UK Delivery or free UK delivery if order is over £35
(click here for international delivery rates)

The air battles of the Second World War were fought ferociously and with extraordinary skill and courage on both fronts. The fighter pilots of the Luftwaffe, the jagdflieger, in fact outscored their Allied counterparts by some margin and were some of the highest scoring fighter pilots of all time. More than a hundred recorded a century of aerial successes with two going on to surpass a quite astonishing 300 victories.

In the end, the vast effort required by the Luftwaffe to maintain the air war on so many fronts proved too much and few jagdflieger survived the last days of the Reich but their courage and ability was beyond question, and the names of some will live on in the annals of air warfare with their extraordinary achievements never to be surpassed.

In 'Luftwaffe Fighter Aces', Peter Jacobs examines the many campaigns fought by the Luftwaffe from its fledgling days during the Spanish Civil War to its last days defending the Reich, and includes the exploits of Erich Hartmann, the highest scoring fighter pilot of all time, Hans-Joachim Marseille, the Star of Africa, Werner Mölders, the first recipient of the Diamonds, and Adolf Galland, perhaps the most famous of all.

It is an interesting and valid account, well worthy of reading.

Mr. Jacobs was in the Royal Air Force for over thirty years. So if anyone is qualified to write this book, it is him. He manages to tell the story of the war, and weave in the different pilots' lives and actions into it. It is true they fought for a horrible cause, but many of the people we history lovers read about would be listed in that way also. I congratulate Mr. Jacobs for this excellent volume on the German Jagdflieger. It is a great book for the novice and the expert alike on German WW II fighter pilots. The book not only describes the day fighters, but also the Reich's night fighters.As the author points out, many of these men were in their very early twenties when the war took place. At the same time that many people are just finding their way in the world, these men were in a life and death struggle with other young men and women (at least on the Soviet side). The appendices list the top scorers and their medals.

This is an outstanding book that charts the exploits of the leading Luftwaffe fighter aces. ... If you want to know more about these highest scoring fighter aces then there is no need to look any further as you have just found the best reference work on the subject!