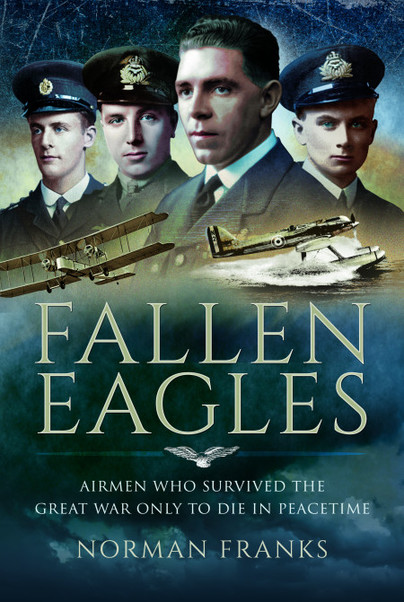 Click here for help on how to download our eBooks
Add to Basket
Add to Wishlist
You'll be £4.99 closer to your next £10.00 credit when you purchase Fallen Eagles. What's this?
Need a currency converter? Check XE.com for live rates

The 93 pilots featured in Fallen Eagles were all decorated for bravery during The Great War. All survived the conflict only to die flying in the post-war years.

The causes of their deaths ranged from being casualties of small wars, then as now rife in the Middle East, mechanical failure or pilot error. The 1920s were still pioneering years for aviation and aviators and test flying, air races and displays, record attempts etc were fraught with dangers known and unknown.

In addition to the better known names such as Sir John Alcock, Captain W Beauchamp-Proctor VC and Sammy Kincaid there are many that will be unfamiliar to all but the most ardent enthusiasts. But all have courage and love of flying in common and sadly luck ran out for each of these men who made a contribution to the history of flight. Thanks to acclaimed aviation historian Norman Franks, their names are not forgotten.

Fallen Eagles is a fine and highly recommended effort by one of our most prolific aviation authors.

A book should be about the size of an airport terminal. Not too rudimentary, and not too overblown with distractions either – but still big enough to deliver all the anticipation, preparation, challenge and satisfaction you’d expect for your planned flight.

That’s not how this one works though. Rather than take us from the front entrance to a single departure gate, Norman Franks starts at one end of the building and walks us along the entire concourse instead.

NOTE: reviewed alongside Death was their Co-Pilot by Michael Dörflinger

I was drawn to read these books as I have had an abiding interest in the aviators of the Great War ever since my father used to tell me bedtime stories (more than 50 years ago) of Ball, Mannock, Bishop and McCudden. I thought that a book from a German author, previously unknown to me, might give me an interesting new perspective. By contrast, Norman Franks is very well-known as one of the world’s leading authorities on the subject and any book he writes is highly likely to be well-researched and authoritative. I also thought that his chosen subject was an intriguing idea, consisting as it does, of more than 90 brief biographies.

There is no doubt that Michael Dörflinger has a deep interest in the airmen of the First World War, particularly those from the Central Powers (Imperial Germany and Austria), as opposed to what he calls the Entente Powers (Britain, France, Russia, Belgium, Italy and the USA). He has amassed a considerable amount of biographical information. He includes many photos which I had not seen before – particularly those depicting German airmen. However, the book is hampered by the author’s writing style, which lacks fluency and tends to jump about from place to place. I do not think that this is the effect of being translated from the original German. I believe that it would have been much better had the script been more tightly edited and revised, as in its present form it reads to me like a collection of notes which have been assembled rather than a fully developed and coherent account. The author makes many assertions and statements but does not follow them up satisfactorily, and some are simply wrong. On page 93, ‘In 1928 he [Willy Coppens] broke the world record for parachuting.’ I am really not sure what this means. Page 100, ‘Rickenbacker came from a region the US Army traditionally found many recruits.’ Even if true I do not really see the relevance. Page 105, ‘Jack Morris Wright wrote…’. We only find out much later who he was. Page 110 the photo caption is incorrect. Page xx we are told Gitterschwanz is contemporary German slang for aircraft with an open framework of metal tubes behind the cockpit [eg DH2, FE2B] but on page 144 two BE2 are said to be Gitterschwanz. Page 160 Billy Mitchell was not ‘reduced to the ranks’. Page 179 ‘the BF two seater was a very dangerous customer’ [Bristol Fighter?] appears in another paragraph on Gitterschwanz. Page 182 the DH4 did not have a 400 hp engine, the DH9a did. Page 184 the photo is of the SE5a and not a Sopwith Camel as captioned.
The overall effect is of a series of sketches loosely collated and put more or less in order. It is not an easy read. It also lacks an index and references to nearly all the many quotes in the text. The book is not without some interest but in my opinion is not up to Pen & Sword’s usual very high standards.

Fascinating bios of the men known as the Fallen Eagles.

Ninety three pilots have been profiled in an unusual and effective book. Extensively researched and illustrated, this is a very efficient review of pilots who survived against all the odds during the Great War, only to be killed during the peace that followed – Highly Recommended.