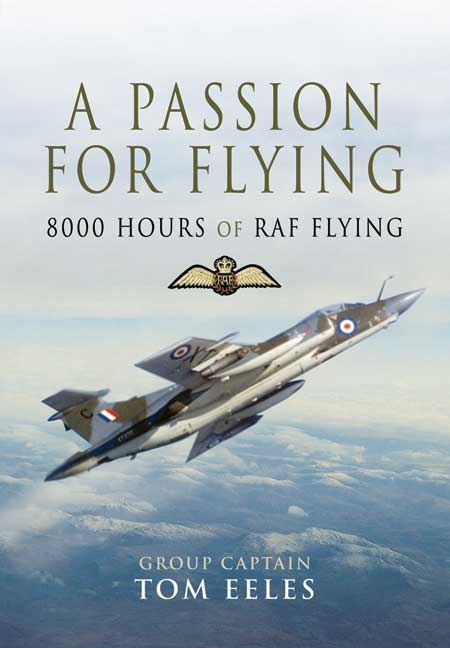 A Passion for Flying (ePub)

Click here for help on how to download our eBooks
Add to Basket
Add to Wishlist
You'll be £4.99 closer to your next £10.00 credit when you purchase A Passion for Flying. What's this?
Need a currency converter? Check XE.com for live rates

Group Captain Tom Eeles served in the RAF for 44 years and totaled over 8000 hours of flying in twenty-eight different aircraft types. Tom entered RAF College Cranwell in 1961, he gained his RAF wings in 1963. His first posting was to No 16 squadron flying the Canberra. Its role as a light bomber squadron was primarily nuclear strike, with a secondary role of conventional ground attack by day and night. 16 Squadron was deployed to Kuantan, Malaya. In July 1966 and on loan to the Senior Service, Tom reported to RNAS Lossiemouth for a swept wing conversion course on the Hunter before starting the Buccaneer Operational Flying Course. After 65 hours in the Buccaneer he was posted to 801 NAS, HMS Victorious.

In 1969 he joined 736 Naval Air Squadron which was responsible for training courses for RAF aircrew converting to the Buccaneer. He moved to 12 Squadron based at RAF Honington. Their task was to provide a maritime strike/attack capability and a nuclear strike capability in support of the UK National Plan. 1975 saw a move to 79 Squadron flying the Hunter. After a spell at the RAF Staff College, Tom became staff officer responsible for all aspects of fast jet advanced flying training on the Hawk at Valley and multi engine advanced flying training at Finningley. In 1983, selected to command 237 OCU, again flying the Buccaneer at Lossiemouth.

First released in 2008, this is an updated version of Tom Eeles' original book, brought up to date with his more recent flying activities.

I certainly did enjoy this book and would recommend it without hesitation. A real pilot's book, but one which will also appeal to more general readers.

In this interesting autobiography, Gp Capt Tom Eeles reflects on his many years of flying military jets.
A gripping story.

8.000 Hours of RAF flying has Tom Eeles logged as a pilot when is pensioned at an age of 55 years. In this book he describes his RAF career that started in 1962 and ended in 1997 after which he kept flying as a reserve officer and instructor with the Cambridge University flying school. In the back of the book there is a list published of all types he flew and held a type rating and which are also referred to in his flying stories...

...Hilarious and exciting air adventures make this biography a nice book to read describing all facets of his life in the RAF as pilot and flight instructor. His writing style is intelligible also for the non pilots amongst us and technical facts are explained clearly. With its nice looking quality cover, 147 pages of flying stories and a fair amount of black and white photos made during his life as a fast jet pilot, it is a nice book to read and to keep in your bookcase.

The author clearly relished his service career to the full and was always game for a good party, some memorable ones are described, and there are not a few anecdotes of other amusing incidents. Warmly recommended.

This is an easy to read book, well illustrated with some of the author's photo collection.

Slim, beautifully packaged, stimulating, totally action-packed. That describes the author quite nicely, and does equally well for the book.