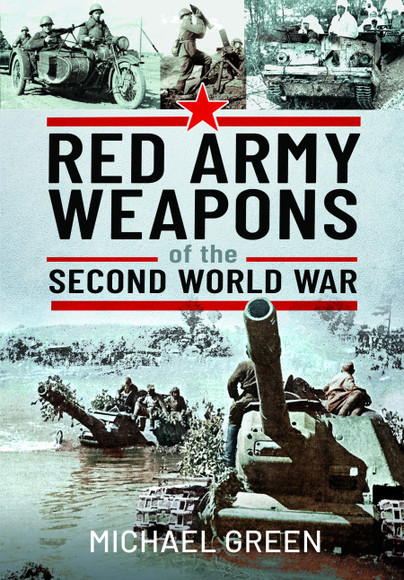 Preorder
Add to Wishlist
You'll be £20.00 closer to your next £10.00 credit when you purchase Red Army Weapons of the Second World War. What's this?
+£4.50 UK Delivery or free UK delivery if order is over £35
(click here for international delivery rates)

While the Red Army’s arsenal at the start of the Second World War included weapons dating back to the Great War or earlier, the 1930s’ modernization programme had introduced the automatic Tokarev pistol and self-loading Tokarev rifle.

Its small arms were soon replaced by mass-produced sub-machine guns, such as the PPSh 1941, nicknamed the ‘PePeSha,’. Supplementing the submachine guns, the Degtyarev Light Machine Gun DP-27. Fitted with a circular pan magazine, it received the not-unsurprising nickname ‘Record Player.’

New mortars and towed artillery pieces, ranging from 76mm to 203mm, entered service in the pre-war years. In addition to a wide range of towed, self-propelled and anti-tank guns, the Soviets fielded the Katyusha rocket launchers in 1941, nicknamed the ‘Stalin’s organ’ by the Germans.

The 1930s saw the introduction of the BT light tank series. The iconic T-34 medium tank series came into service in late 1940, joined by the IS-2 heavy tank from early 1944, the prefix letters ‘IS’ translates to Joseph Stalin. These formidable AFVs led the Red Army to victory in May 1945 over Nazi Germany.

All these weapons and more are covered with numerous images in this authoritative overview of the subject.