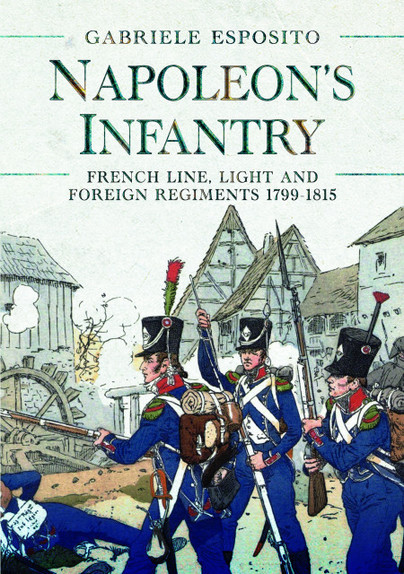 Preorder
Add to Wishlist
You'll be £16.00 closer to your next £10.00 credit when you purchase Napoleon's Infantry. What's this?
+£4.50 UK Delivery or free UK delivery if order is over £35
(click here for international delivery rates)

This volume covers the infantry units of Napoleon’s Imperial Army, during the crucial years 1800-1815. When the future Emperor assumed control of France, the infantry of his army was disorganized and poorly equipped; it lacked discipline and was trained in a quite old-fashioned way. Napoleon acted very rapidly to resolve the major problems of his foot troops, by giving them a new structure and by teaching them new tactics. By 1805, the French infantry was without a doubt the best in the world in terms of combat capabilities. The book will cover all the categories of units that were part of Napoleon’s infantry: line regiments, light regiments, foreign corps and special corps. It is not always realized that the French infantry of 1800-1815 included large numbers of foreign soldiers and even an Irish Legion; all these little-known corps are taken into consideration, together with several special corps like Corsican light infantry and mountain infantry. Gabriele Esposito provides a complete guide to the French infantry of Napoleon, illustrated with rare contemporary uniform plates that have never been published before.

The period covered in this book is one of the most famed and glorious for the British Army and the infantry were its backbone. Gabriele Esposito examines how the foot regiments were reformed and evolved to absorb the lessons of defeat in America and setbacks elsewhere to become the efficient and dependable bedrock of victory in the Napoleonic Wars. He details the uniforms, equipment and weapons of the infantry, along with their organization and tactics. Chapters are devoted to the Guards, the line regiments of foot, the Light Infantry and Rifles as well as Highland and Lowland Scots regiments.…