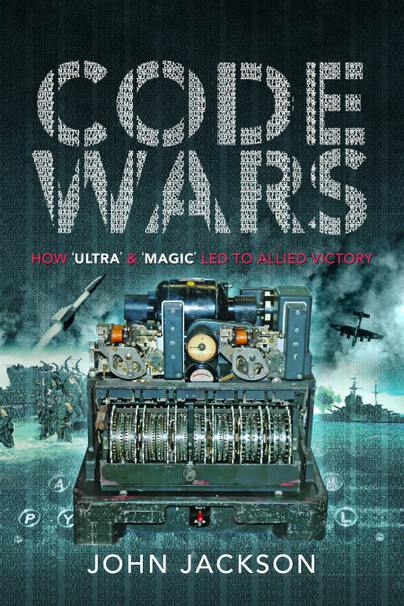 How 'Ultra' and 'Magic' led to Allied Victory

Add to Basket
Add to Wishlist
You'll be £12.99 closer to your next £10.00 credit when you purchase Code Wars. What's this?
+£4.50 UK Delivery or free UK delivery if order is over £35
(click here for international delivery rates)

Order within the next 7 hours, 36 minutes to get your order processed the next working day!

When the top secret codebreaking activities at Bletchley Park were revealed in the 1970s, much of the history of the Second World War had to be rewritten. Code Wars examines the role of ULTRA (the intelligence derived from breaking secret enemy signals) on major events of the Second World War. It examines how it influenced the outcome of key battles such as D-Day, El Alamein, Crete, key naval battles, the controversy surrounding Churchill and Coventry, the shadowing of Hitler's V1 pilotless aircraft and the V2 rocket.

The book also examines the pioneering work in breaking Enigma by the Polish cryptographers, and the building of Colossus, the world's first digital, programmable computer, which helped unravel the secret orders of Hitler and the German High Command. It also tells the story of the American successes in breaking Japanese signals, known as Magic.

It also stresses the vital role of the intercept stations which took down the enemy messages, providing the raw material for the cryptographers to break.

The book shows how the codebreakers were able to shorten the war by as much as two years and bring Signals Intelligence, in the post-war years, into a new era of military intelligence gathering.

CODE Wars is easily the most detailed account I have read, of the work carried out at Bletchley Park, credited with shortening World War II by up to two years. So secret was the place, that a german bomb which landed nearby had been dropped only by accident by the Luftwaffe.

I attended a security and encryption seminar there several years ago, and the history is reaching out to touch you. This book brought back so many memories of my time there and of the expert tour given by people who had actually worked there in that veil of secrecy.

Code Wars gives the reader a window into the history of smoke and mirror code writers and code breakers. Follow along the WWII timeline and see how code evolved and dissolved to change the course of the war and the world.

This is a useful addition to the growing suite of books that set out the remarkable achievements of a relatively small number of men and women who played a leading, but for many years unrecognised, role in the defeat of the Axis powers in the Second World War. Although the name of Alan Turing is likely to be familiar to many, the teams who were selected and deployed in the massive task of breaking the enciphered messages of the enemy forces comprised many other less well known, but no less brilliant men and women. One of the book’s main strengths relates to the examples of how the codebreakers’ skills were used to ensure that decrypted communications were enabled to influence operational and tactical moves by senior officers, in addition to the more usual strategic or longer term benefits that could flow from such decrypted messages... this is a book that is well worth the time and effort expended in reading it. Recommended.

The author has succeeded in delivering a narrative that takes an overview of codebreaking in WW2. It is not just a repeat of the ‘Ultra’ story and Bletchley Park but also looks at the American efforts against Japan. As ever, having broken the enemy codes and gained access to enemy information, they real dilemmas of how to use that advantage without making it obvious that the codes had been cracked, is in my view the moral drama of this book. It is an easy but rewarding read on a subject that provokes many ‘what if’ questions.

John Jackson is a journalist and writer who has specialised in Second World War Signals Intelligence. He has written The Secret War of Hut 3 and Ultra's Arctic War and has edited the declassified Official History of British Sigint1914-1945 and Naval Enigma: The History of Hut 8 1939-1943. He is a volunteer at Bletchley Park.